The Tikotin Museum of Japanese Art in Haifa. Now and zen.
A haiku:
The Tikotin Museum
of Japanese Art.
It's OK.
Where in the Middle East are you likely to find a museum dedicated to the art and culture of Japan? Why, Haifa, of course! The story of how the founder of the museum, Dutch Jewish architect Felix Tikotin, came by his remarkable collection, how he buried it in Holland during World War Two to elude the Nazis, how he recovered them and then, by chance happened upon the then mayor of Haifa, is as fascinating as the museum itself. 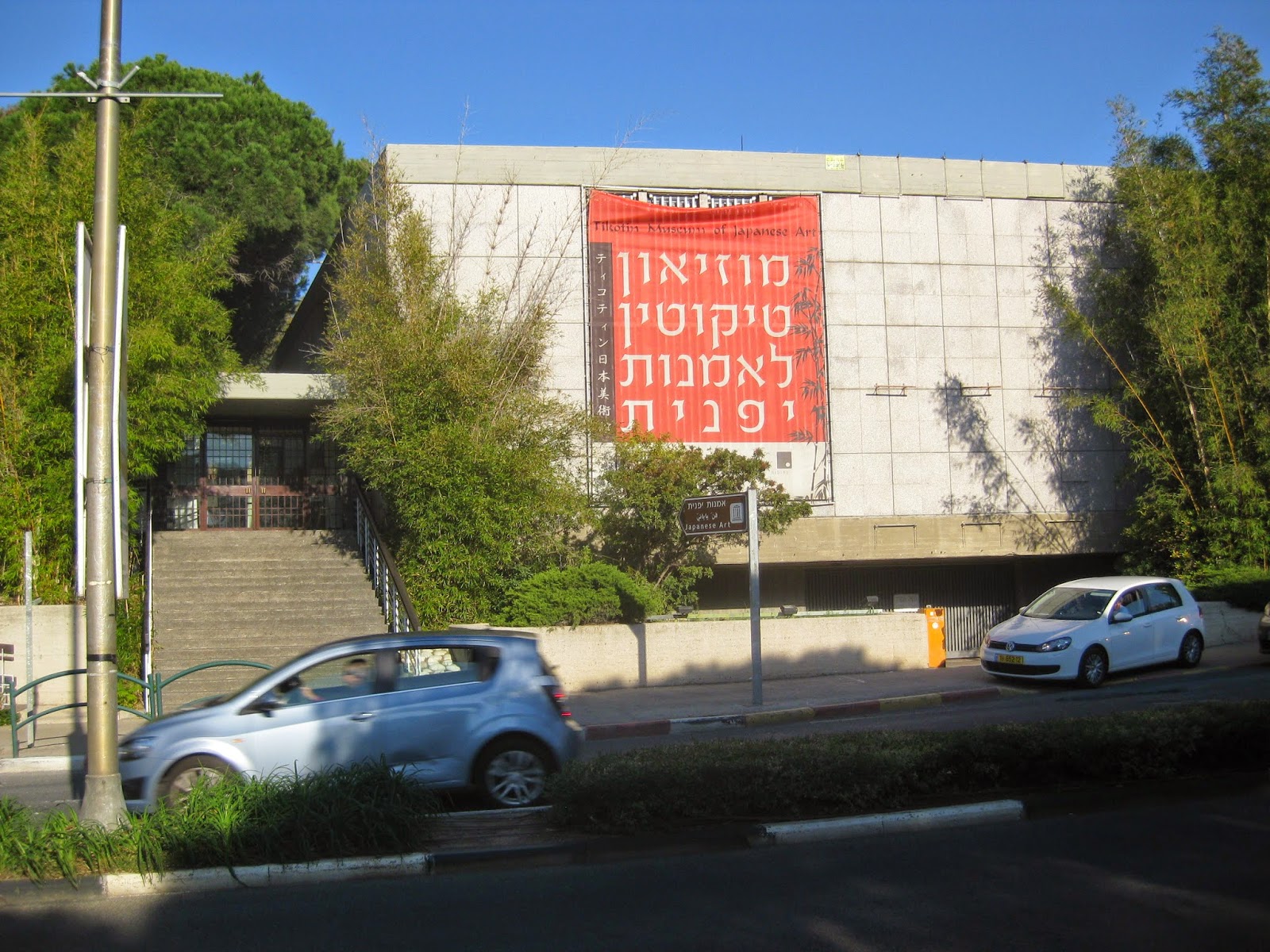 Now housed in a dedicated building, designed on traditional Japanese principles (just look at the doors) and surrounded by mature bamboo plants, the Tikotin Museum houses not only displays of the prints and art which the founder himself acquired, but also rotating exhibitions of contemporary Japanese art, in all its forms. When we visited, there were displays of modern kimonos, exquisite nature photographs and commercial art from a young designer, who worked on ancient Buddhist principles. You will, no doubt, see different things.


The museum is right next to the Dan Carmel hotel on Hanassi Boulevard in Central Carmel.
Posted by RCEU at 11:26 No comments:

The Louis Promenade – the Tayelet. Take your place on the Balcony of the State

The Louis Promenade – the Tayelet. Take your place on the Balcony of the State

One of the hidden gems of Haifa is the Louis Promenade, a  400 metre long walkway and viewpoint, established in 1992 along Yefe Nof Street in Haifa. The promenade starts from the ridge line at Nof Hotel to the entrance gate of the Bahai Gardens. It was funded by Paul and May Goldschmidt, Haifa residents who had emigrated from South Africa, in memory of their son, Louis-Ariel, who was killed in a car accident in 1971.

The promenade, located near the Carmel Center area, earned the nickname "the balcony of the State."
Walking along the promenade from before sunset into the evening, you will get to see an amazing view, often blended with the beautiful colours of the setting sun. During the night, the entire promenade is lit up to allow you to enjoy it even after dark.  The fabulous daytime views, often as far as Rosh Haniqra and even Mount Hermon, become twinkling lights stretching from Haifa to the far north.
How thoughtful were the designers to set up benches all along the promenade as well as pergolas for shade. You can also walk through to many hidden corners which blend in among the local flora, the Mediterranean natural forest and the broad lawns. 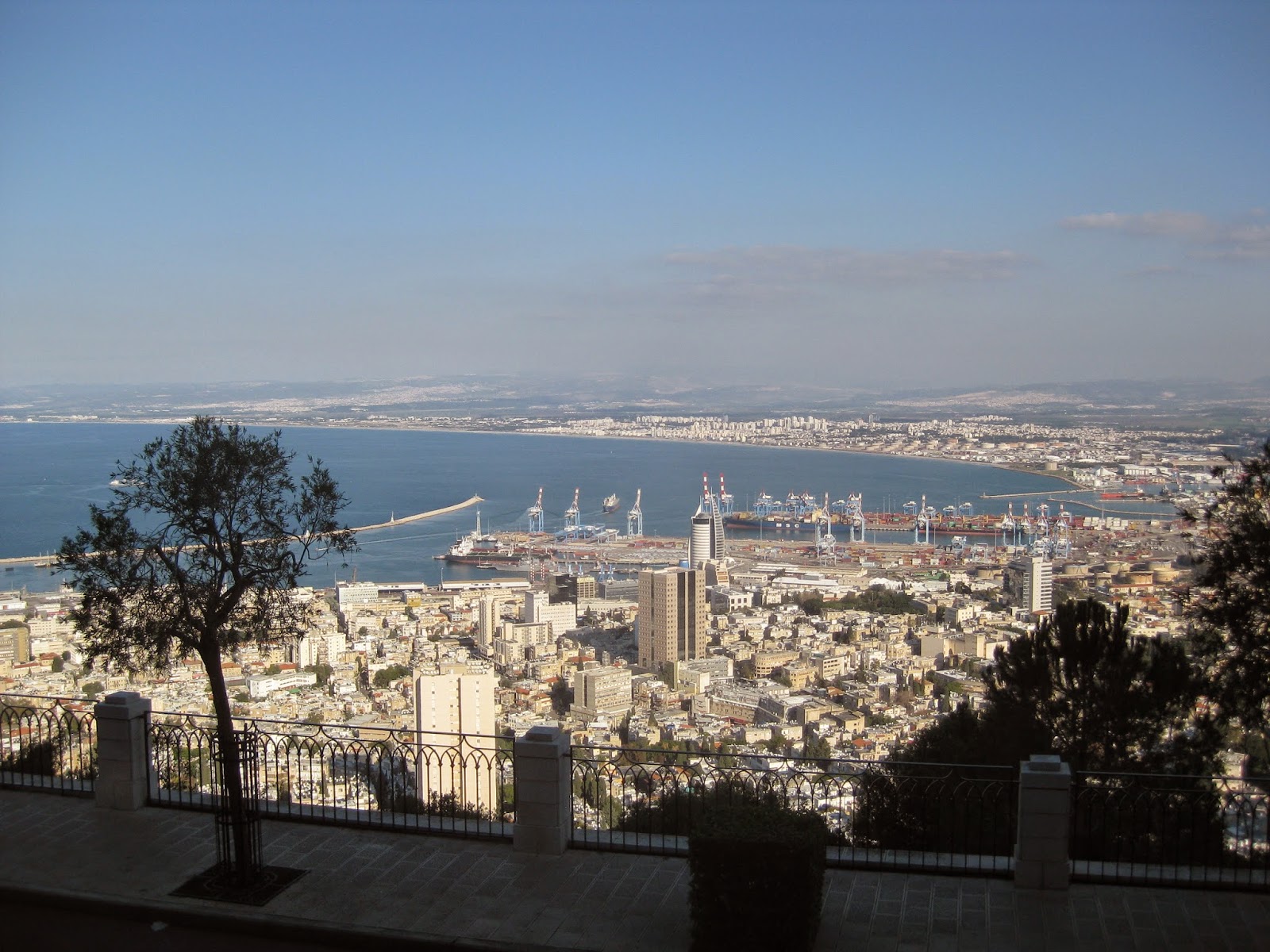 But in case you just wanted to enjoy the view, pause a while at the obelisk commemorating the visit of Kaiser Wilhelm II in 1898, which is now found at the centre of a small grove. Here, the residents of the Templar Colony of German protestants celebrated their holidays in the days before they were expelled by the British in World War Two, especially the "Kaiserpast" on October 25, the day of visit of the German Kaiser in Haifa. In 1918, the British Army, under General Allenby, destroyed the obelisk, but it was restored by the Israeli government, but with the ‘counterbalance’ of an enormous French naval cannon. With a delightful pool and a children’s playground, this really is a ‘do not miss’ location.
The Louis Promenade is immediately opposite the top entrance to the Bahai gardens (just cross the road carefully and climb a few steps), or from a passageway between the Tikotin Museum and the Dan Carmel hotel.

Labels: Children, family friendly, North, Public transport friendly
Sarona in Tel Aviv. How the world turns
I have written before about Sarona, the German Templar settlement in Tel Aviv and how they developed agriculture export and industry at the turn of the twentieth century. I also wrote how it became a British army camp, then the first seat on government for the fledgling State, forming part of the 'kiriyah', now being relocated to other parts of Israel. Up until now, this was about as good as it got, but with typical Israeli élan, the small area has been brought back to life, albeit in a very different guise. In just an area perhaps no bigger than ten football pitches, you will see the old houses brought back into use, mainly as up market shops and cafes. An information centre will sell you tickets for a tour, but only in Hebrew, as is the website. English speaking group tours can be arranged via saronabook@shimur.org.il but if you just want to read about the houses, each one has a useful notice outside with a brief explanation. There are attractive seating areas, cool pools and an excellent playground too.
One delicious irony: the first building you come to was once the community centre for the German Templars. In World War Two, with the Germans shipped of to Australia, it became the British army camp cinema. By 1948 it had metamorphosed into the Israeli army base synagogue, then the staff restaurant and social club. And now? It is the flagship store for Adidas, with the name proudly displayed on the outside of the building. How the Templars would have smiled!
You can easily reach Sarona, at the junction of Menachem Begin and Eliezer Kaplan Boulevards and about a five minute walk from the Azrieli Centre. 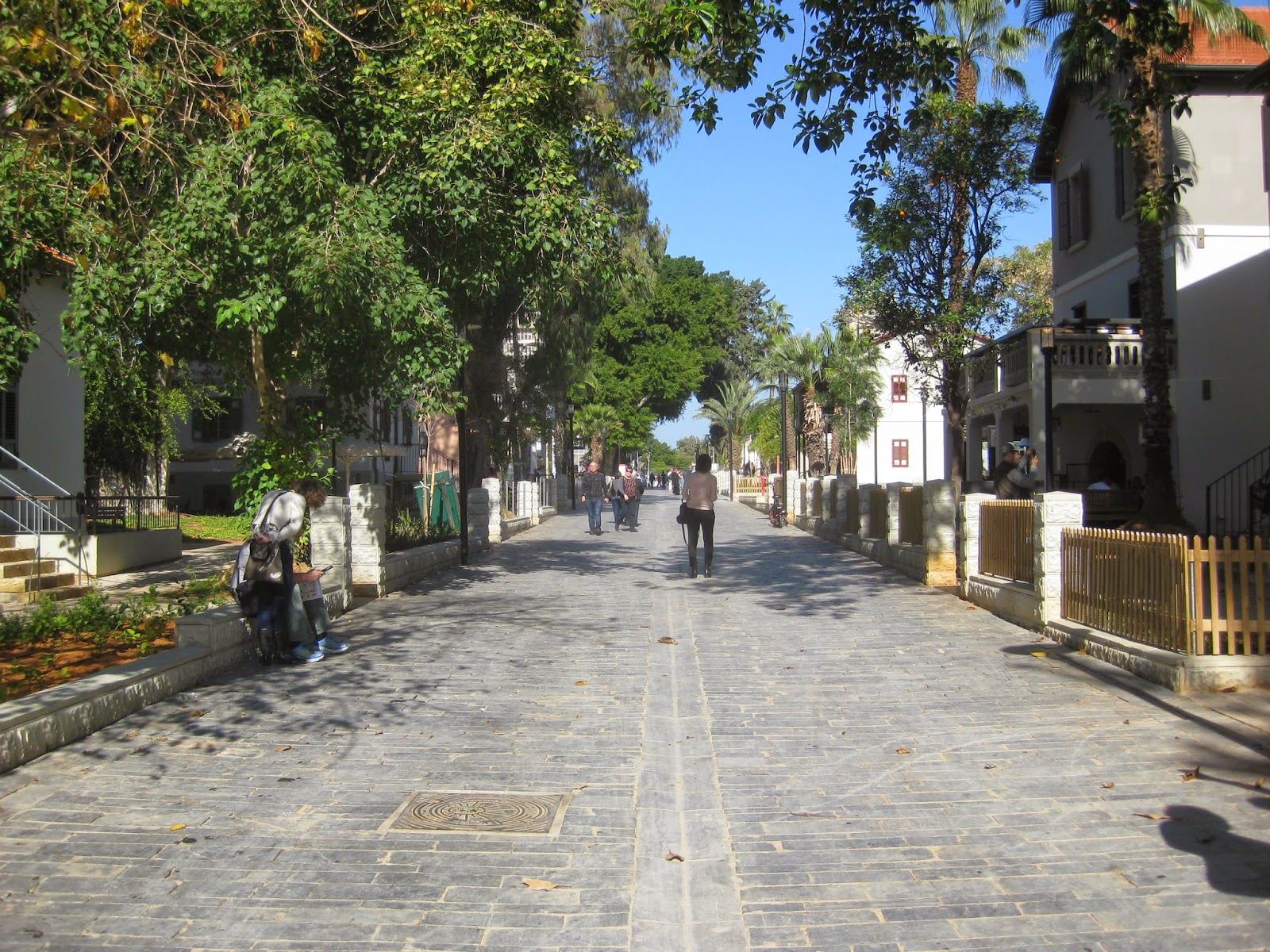 It's hard to tell. Tel Gezer 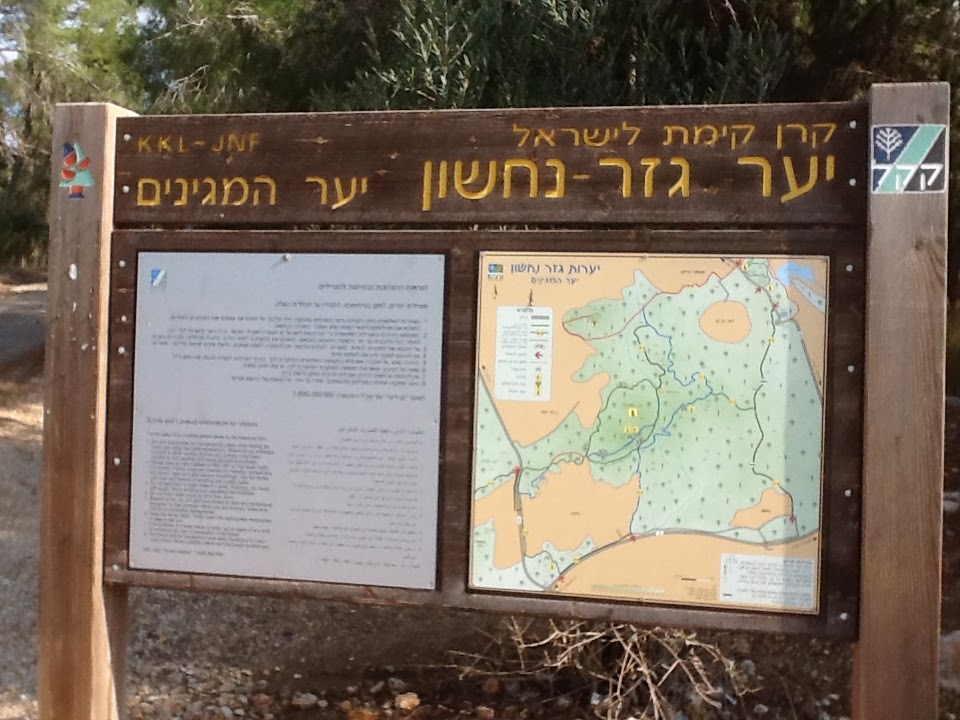 Those of you who know a thing or two about ancient Israel will know that Gezer was about as important a city as you could get. Predating the arrival of the Israelites, it is mentioned many times in Tanach, the Jewish Bible, and it's location has hardly been a secret. Sitting at the junction of the Via Maris, the ancient coastal route from Egypt to Mesopotamia, and the road to Jerusalem, it was almost inevitable that it would become occupied and fought over many times. Recent excavations have shown a well fortified Israelite city with the now familiar Solomonic Gates, although we all now understand that they may not have exactly been the sole invention of King Solomon himself!
So when you see the Tel Gezer National Park marked on a map, not too far from Tel Aviv or Jerusalem, you would immediately think that once again, Israel has managed to combine our story, history and recreation. And you would be wrong.

The Tel Gezer park does indeed exist, and the access from route 40 is almost easy to find, if you keep your eyes peeled. But do not expect an easy walk to the excavations, as at Megiddo or Hazor, with well maintained signs, tracks, or even toilets. In fact, you can only reach the ancient site by a 4x4 track or a very considerable walk. What is easy to find, though, is a most attractive drive around the perimeter of the park, thoughtfully laid out by JNF together with some attractive picnic spots. As you drive - and occasionally stop - it is easy to see why Gezer had assumes such strategic significance. On a clear day, you can see right across the Shephela to the coast, or at least as far as the outskirts of Tel Aviv. In the other direction, you can see the foothills of the Judean mountains and can imagine yourself mounting sentry guard at the gate. Well, at least you could if you could get there easily!
You can find the entrance to the park on route 44, just north of the junction with route 3.
Posted by RCEU at 12:56 No comments:

Park Golda - far more than a place to stretch your legs 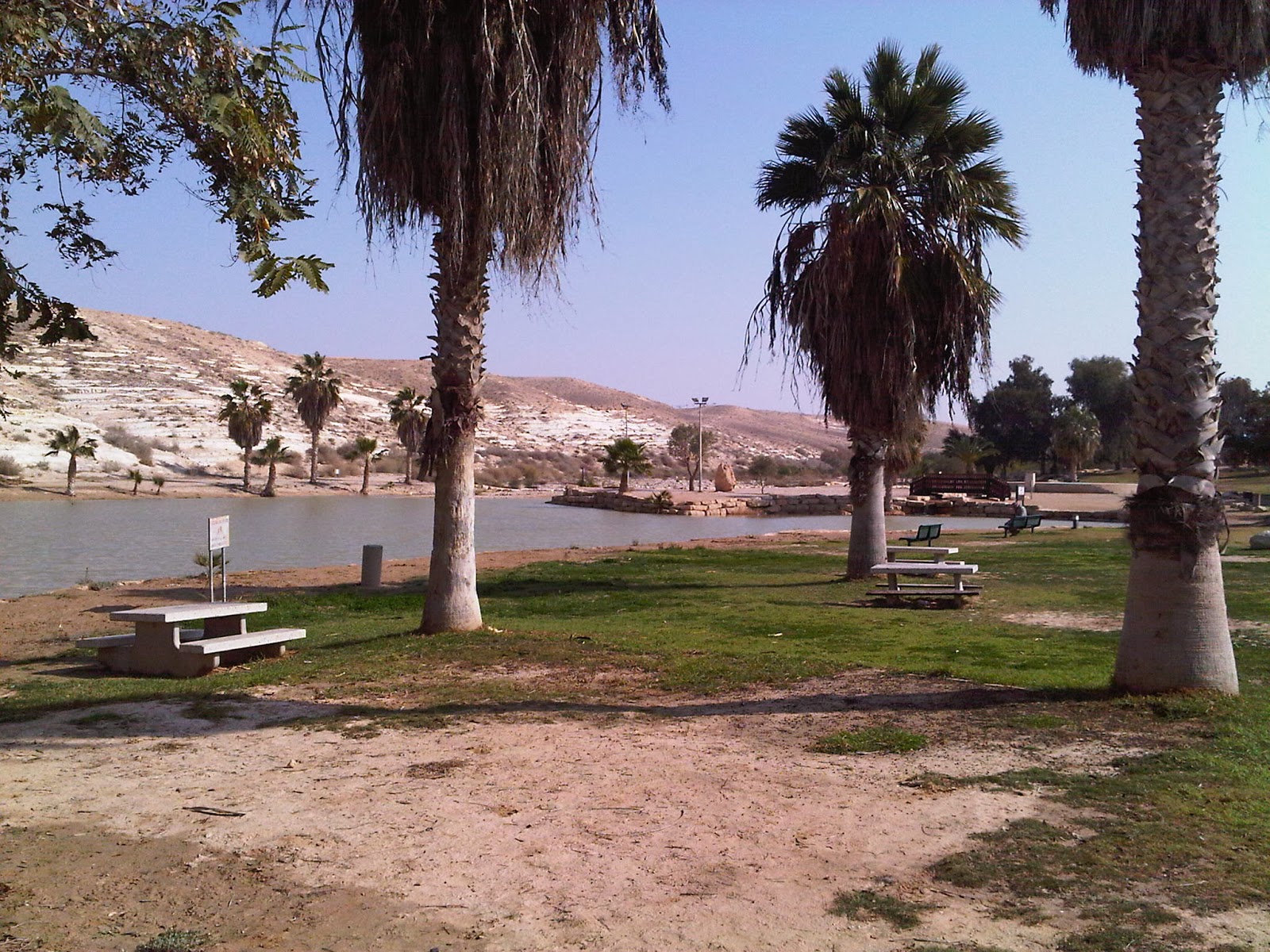 Driving in the Negev can be an amazing experience, but sometimes you need a break and somewhere to stretch your legs. Where better than Park Golda, a JNF project named after the fourth Prime Minister of the State of Israel, Golda Meir and conveniently located close to Route 40, as you drive south from Beersheva.
It is no accident that this park was created near Kibbutz Revivim, which was established as an outpost in 1943, on the site of a Turkish railway station and British army camp. They all knew of the sweet water  well that existed here. One of Kibbutz Revivim’s founding members was Golda Meir’s daughter, so she spent a lot of time there, becoming her second home. Park Golda, created in her memory, provides a wonderful recreational site in the Negev as well as rehabilitating an old quarry that marred the impressive desert landscape. It also has started to have an important economic impact for Negev residents, as it now attracts many visitors from all parts of the country.

Despite the very arid climate of the region, with a very short rainy season, there are no dry areas in the park as the Revivim River, a seasonal stream, cuts through the park, and in especially rainy years a lake forms. If and when the groundwater level rises, it also fills the wells in the area of the park. The lake is also filled by the water that rinses the filters of the nearby Neve Midbar Baths. Bathing is not recommended!

Near the lake are extensive lawns, waterways and picnic areas, and play and sports facilities for children plus a new mountain bike track. A short but brisk climb from the lakeside will take you to the Tali lookout point, with breathtaking views of the surrounding area.

Park Golda is directly off Route 222, about 1 mile from its junction with Route 40, midway between Beersheva and Sde Boker.
Posted by RCEU at 06:04 No comments: