There are many archaeological sites in Israel and many with links to the Patriarchs, but the unique feature of Tel Be'er Sheva, which is located to the east of the present city, is that it has been virtually completely restored, with the archaeological ruins represented by everything below a white line. OK, so most of the remains are from the 8th century BCE, from the rule of king Hezekiah, far too late for a sign to be found saying 'Avraham woz ere’, but there are some carved rock dwellings which seem to have belonged to the earliest Israelite period (12th century). It appears that the town was home to some 400 people mainly military troops and proto civil servants who administered the kingdom. The peasantry would have lived in villages and farms outside the town.
Next to the main gate is the well, some 80 meters deep, dug in about the 10th century BCE, but there is a tamarisk tree planted next to it and it isn’t hard to imagine it (or its ancestor) being there in the days of Avraham. Just like at Hazor,,the water was brought up from a very efficient water system, with steps leading down to the water level and a separate flight coming up. Shades of Tevye!
The large (ish) governor's palace, has three main reception rooms, but smaller four-room houses, typical Israelite dwellings of that period, are found in other places, built against the wall - well it seemed such a waste of effort to build another one, I suppose. Opposite the four-room houses is a cellar building, which goes down to the bedrock, probably explained by the destruction by king Hezekiah when he broke down the heathen temple. You can read the whole story in II Kings 18. 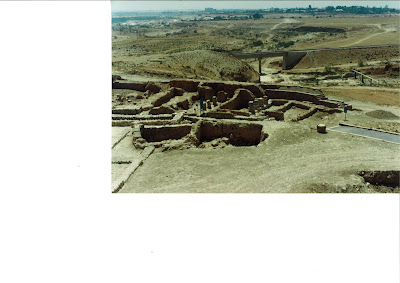 However, to me, the most amazing site is that of standing at the tel and seeing the train to Dimona wend its way slowly past the foot of the mound, with the city's sewage works close at hand, as is the modern Arab town of Tel Sheva. What would Avraham have said?
Tel Beer Sheva is just off Route 60, about 5km east of the new city. If you take the eastern bypass road - and you should – it is less than 1km from the junction with route 60.
To view a Google map of this location, please click here.
Posted by RCEU at 11:18