Hurshat Tal - A park for all seasons and tastes

There’s always a danger when speaking about Israel, of ‘overegging the pudding’ (a phrase which I have consistently used whilst not really understanding – much like my grandmother’s skills at egg sucking!). Having said that, however, I must really recommend Hurshat Tal National Park, right in the northern part of the Hula Valley, as it is the ideal place to spend either a few hours or, in the cabins or camping grounds, a day or more. The landscaped lawns of this delightful spot are well maintained and the well-appointed and kept campground occupy 100 of the approximately 190 acres of the national park. In addition to campsites, the campground has bungalows and rooms for rent, which is a worthwhile option for the canvas-phobic amongst us! 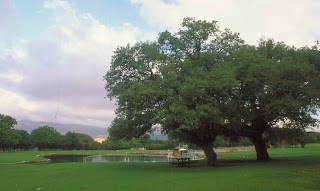 One reason for the lush lawns is a tributary stream of the Dan River, which cuts through the park and fills a large pond (really a small lake) which is open for swimming: best in summer, though. The, by now inevitable, waterslides here are among the highest in the country and the fishing area provides a relaxing diversion at surprisingly no additional charge. So, in theory, you can catch your lunch, cook it on the spot and them promptly recycle it again by using the water slides too soon after eating!!!!

About 25 acres of the national park were declared a nature reserve some time back, in recognition of the 240 rare Mount Tabor oaks growing there. Many centuries old, these trees are among the largest in Israel and should not be missed, as they will remind you of what the land used to look like before many settlers arrived. After the rainy season, in springtime, much of the park is ablaze with anemones and other wild flowers and the park becomes a tourist magnet, especially for Israelis.

Hurshat Tal really is an ideal informal base for exploring the Galilee, the northern Golan Heights, and the Mount Hermon area and, although seemingly remote, is but a few hours easy drive from central Israel.
You can find it on Roue 918 just south of Route 99 at Hurshat Tal junction, about 5 km east of Qiryat Shemona, just east of kibbutz Hagoshrim.

To view a Google map of this site, please click here.
Posted by RCEU at 13:25