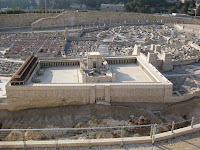 Jewish prayer is replete with references to the building – and indeed messianic rebuilding  - of the Temple in Jerusalem.  In case you have doubts about its location and the topography of Jerusalem just before its destruction in 70 CE, you need only travel as far as the Holyland Model of Jerusalem, a 2,000 square metre (21,520 square feet) 1:50 scale-model of the city of Jerusalem in the late Second Temple Period. It evokes ancient Jerusalem at its peak, meticulously recreating its topography and architectural character in 66 CE, the year in which the Great Revolt against the Romans broke out, with tragic consequences.
The model was originally commissioned in 1966, at the initiative of the owner of the Holyland Hotel, Hans Kroch in memory of his son Jacob, who fell in Israel's War of Independence. It was moved from its original location at the Holyland Hotel in Bayit VeGan, to a new site at the Israel Museum in June 2006, following the sale of the hotel to the developers of one of Jerusalem’s more interesting residential projects.  The model was designed by Israeli historian and geographer Michael Avi Yonah based on the writings of Flavius Josephus and other historical sources. The model includes a replica of the Herodian Temple. Whilst we now believe that some of the ideas put forward are historically not proven (the ‘Roman’ houses have red roof tiles, whist none have ever been found in Jerusalem from that period, the Hulda Gate has been better excavated now, etc) even the original designer left spaces where he did not know how to accurately indicate the situation, hoping that future generations of scholars would update the model as knowledge increased. In 2006, the model was installed, at a cost of $3.5m, next to the Shrine of the Book at the Israel Museum in a topographically accurate setting, as the previous model was just on a flat piece of land. In preparation for the move, the model was sawn into some  1,000 pieces and later reassembled - and all in the right order!
When visiting, a free audio guide will help you understand the world of the Second Temple Period and there are frequent guided tours, too.

The Israel Museum is located on the Museum Campus in the heart of West Jerusalem, opposite the Knesset and is easily accessible by bus, with a free car park as well.
Posted by RCEU at 09:13