The Mount Gilboa Scenic Route. Of Tanach, tragedy and triumph.

In Tanach, Mt. Gilboa (which is more of a ridge rather than a single mountain) is a place of tragedy and triumph. Israelis flock here every year from February to April to see the multitude of wildflowers and the famed purplish Gilboa Iris (Iris Haynei), but it’s good to drive – and stop – at any time. 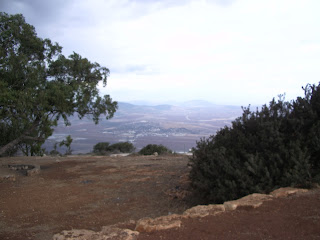 The Book of Samuel tells us that it was here that Saul, the first King of Israel and his sons died fighting the Philistines, “And it came to pass on the morrow, when the Philistines came to strip the slain, that they found Saul and his three sons fallen in Mount Gilboa”, (1 Samuel: 31). Take your Tanach, drive the route and you can easily imagine what, tragically happened.
However, most of what is today the scenic drive is what used to be known as the Patrol Road in Mandate Palestine. While the road is now completely paved, you may actually want to veer off and take some of the unpaved paths (check that your car hire allows it first) and walk a bit – to get the best views of the valley. If you would like to have a picnic, there are many delightful picnic areas along the scenic route. Many have walking trails leading from them, too.
From Gilboa you’ll be able to see the valley below. This part of the Jezreel valley is known as the Harod Valley and it is full of fishponds that attract a great number and variety of birds including cormorants, pelicans and storks. You’ll also be able to see the hill of Moreh where the Philistines assembled to fight Saul and his army, Mt. Tabor and the mountains of the Jordan Valley. On a clear day you might even see Mt. Hermon to the north.
David, who of course replaced Saul, lamented his fallen king in II Samuel 1 thus: ‘You mountains of Gilboa, let there be no dew, neither let there be rain, upon you, nor fields of offerings.’ Over the years some took this curse literally, as the reason for the seeming ‘baldness’ of Mt. Gilboa. However, in recent years the Jewish National Fund planted thousands of trees which have greatly changed the situation, although ‘bald spots’ are still visible in places.
Guide books will tell you that late winter and early spring are the best time to savour the full splendour of Gilboa and the valley below, but we have been there at other times of the year and each has its reasons to visit.
The scenic route is Route 667 and runs from Route 90 south of Bet Shean to the junction with route 675, near Route 71, south east of Afula. If you want to break your drive, Route 6666, about half way along, will take you back down to the Jezreel Valley in a series of spectacular hairpin bends.