Situated at the foot of the Mount Gilboa range of hills lies a gem of a park, Gan Hashlosha, ranked by Time magazine as one of the twenty best parks in the world.  Whether you decide that their ranking system is good or not, it certainly takes a lot of beating. The same geothermal activity which sends very hot water to Hammat Gader’s pools, drive gently warm spring waters to emerge as the Amal Spring in the western part of the park at a constant, year-round temperature of 28 degrees Celsius. This means that swimming is pleasant here out of the summer season, too. The Amal Stream crosses the entire park, and has been widened into pools, with safe bathing for adults and children, too. Numerous picnic tables a cafe and changing facilities show that the Parks Authority has tried to think of almost everything, although overnight camping is not permitted. 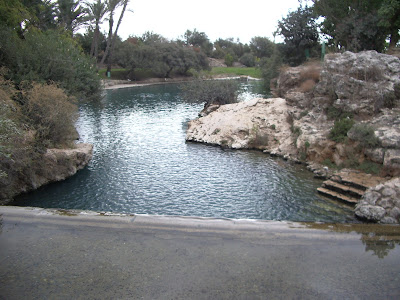 An old water-powered mill now operates again and also features a display of agricultural tools. The adjacent madafeh, or Arab hospitality room, has also been restored.

In another part of the park is a restoration of Tel Amal, established on the night of December 10, 1936 as one of the Tower and Stockade settlements set up by Jewish pioneers in the face of British Mandate opposition. The rooms in which the pioneers lived feature an exhibit of daily objects they used. In another room, children can enjoy putting together a model of a settlement. A 10-minute film (in Hebrew) in the restored dining hall depicts life during the time of the Arab revolt (1936–1939).  Opposite Tel Amal, over a small bridge, is the regional Mediterranean archaeological museum, showing the life’s work of a local expert. It contains a display of rare Greek tools, finds from excavations in the Bet Shean Valley, some of which come from as far away as Egypt and Persia, and a unique exhibit about the Etruscans. It also has a display showing what local life must have been like in biblical times.

All in all, an excellent day out for the whole family, but be aware, lots of Israelis think so too in the height of the summer vacation time and during chol hamoed, too.