Imagine the Watford Gap services for millions of migrating birds, heading from Northern and Eastern Europe to the breeding grounds of Africa and then returning six months later.  Tired and hungry, they look for the very best place to rest and feed, before flying on. This is the Hula Nature Reserve. Once an expanse of fifteen thousand acres, in the 1950s, the new Israeli government decided to drain the marshes of the Hula lake to create farming land. It was d disaster Due to the ecological ramifications of draining the swamp, so, in 1994, the authorities decided to restore part of the marsh by reflooding a portion of the reserve. Perhaps only in Israel would this decision be taken.
Of course, in the intervening years, many of the birds who had once made their homes in the Hula moved on, but after the reserve was restored, a number of species returned, some nesting there permanently. During migrating season, bird-watchers have counted nearly 400 species of birds that come to the reserve to rest, and some species, like the white-tailed eagle, are being reintroduced to the area by the staff of the reserve.
You will enter the reserve through a Visitors Centre, called the "Oforia" (bird house). Put on the 3D glasses they give you, sit back on the moving seats and experience the multi-sensory simulation programme, complete with smells, clouds, wind turbulence and amazing video footage. Then you wander through the displays to learn about the Hula Nature Reserve and its history - the plants and animals that once existed in the reserve, and those which have been reintroduced to the area. 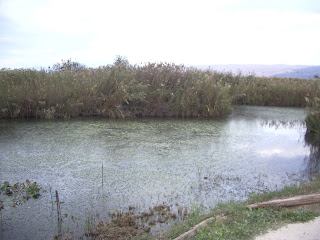 When you leave the Visitors Centre, you walk to the reserve. Bikes and small jeeps are available for rental and all the paths are wheelchair and buggy friendly. The stroll into the reserve takes about 15 minutes, plus stops, during which time the birds circle overhead. Walking quietly, one can see various animals such as coypu and water buffalo, reptiles (mostly turtles) and fish. There are many spots to sit and relax while watching the birds flying overhead, but at the end of the trail, a covered walkway takes you out over a lake near the birds' nesting area so that you can observe the birds without scaring them. A lookout tower achieves a similar effect.
The greatest number of species can be viewed during the winter, from October to May, which includes both the autumn and spring migrations. The best time of day to come is the late afternoon, immediately before sunset, when the birds, return for the night. Look upward and see thousands of birds of every imaginable size and species gathering in the Reserve. It's a sight that is not easily forgotten.
You reach the Hula reserve by turning of Route 90, north of Rosh Pinah and north of route 9119.
Posted by RCEU at 04:43