Ir David, the City of David Jerusalem Walls National Park - Where it all began

Where it all began - Ir David, the City of David Jerusalem Walls National Park

For those of us with some knowledge of Jerusalem, both mishnaic and modern, it's easy to forget where it all started. However, a trip to Ir David, the City of David Jerusalem Walls National Park will certainly help to put it all into context.
Why did David want to conquer this rocky outcrop? Why was it here at all?
Was it the religious link with Har Hamoriah, about which he must surely have known? Was it the strategic value, in the neutral territory between rival tribes? Was it the fact that there was a ready and constant source of sweet water? Perhaps it was all three.
We know that David built his royal palace here and that Solomon enlarged the city to include the Temple Mount, but after his death and the civil war which followed, the city remained the capital only of the Kingdom of Judah. We all know what happened with Assyrian and Babylonian attacks and conquests, exile and return, Maccabeans and Romans, but for the next nearly two millennia, the area was forgotten, until the mid nineteenth century, when the pious Sephardi Meyuhas family moved there from inside the Old City, where the family had lived for many generations. They were followed shortly after by a large group of Yemenite Jews, who had moved there en masse. The archaeological efforts of British army engineers and explorers Warren, Robinson and others, funded by the, still extant, Palestine Exploration Fund, started to reveal the extent of the amazing history of the area. Perhaps even more fascinating than the dramatic discovery of Hezekiah's Tunnel has been the recent finding of a Canaanite passageway leading safely to a sweet water pool, which predates it by 1,000 years and was perhaps the 'gutter' referred to in 2 Samuel 5,6-8!
Your trip to the site, whether with one of the excellent guided tours or on your own, should start with the 3D video presentation, which will put the site into context, historically and geographically. However, the next part of the tour will take you down many, many steps, as you descend past the Davidic Royal Quarters and into Warren's Shaft. Whether you decide on the dry walk through the narrow and twisting Canaanite passageway or the longer and wetter walk through Hezekiah's Tunnel, you should allow two to three hours. If you decide not to take the shuttle bus back to the top, past the Arab village of Silwan, but choose to walk back up, past the 'tombs of the House of David', you can add many more minutes to your trip!
To access Ir David, leave the Old City via the Dung Gate, turn left and cross the road. In about 100m, turn right and the entrance will be on your left. You can't miss the harp sculpture at the entrance. 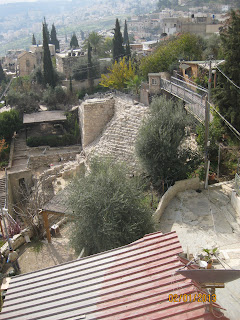