Most of the parks and open spaces in Israel feature playgrounds, caves and toilet blocks, sometimes not necessarily of the most savoury. If you are looking for something a little more basic, yet close to Tel Aviv and the coastal region, Tel Hadid could be just up your street. Located at the edge of the Ben Shemen Forest, close to Lod airport, this is an area of land developed by the JNF for active recreation. A paved track leads you up through some woods - and goats - to running trails, cycling trails, quad bike trails and even off road vehicle trails. At the summit there are picnic tables and a look out point. And WHAT a lookout point!

You can easily see why Simon Maccabee, brother of Judah, built up an observation point and that there was already a Jewish community at the time of the destruction of the First Temple. What is also not surprising is that there is evidence of Bronze Age settlement and Assyrian immigration, witnessed by the discovery of documents and seals, written in cuneiform. Stand at the observation point and, although it is only some 150 metres above sea level, you can see (weather permitting) as far as Tel Aviv, Herzliyah and Petach Tikvah on the pancake flat Shephela. Yet all you have to do is turn your back on the view of Tel Aviv, Ben Gurion airport and Route 6 as it winds around the base of the tel before disappearing into a tunnel beneath the tel and you could be back in biblical times, with some farms and small settlements - and those goats! You can easily reach Tel Hadid directly off Route 444, just north of the mega junction with Routes 1. It's no more than twenty minutes from the beach at Tel Aviv! 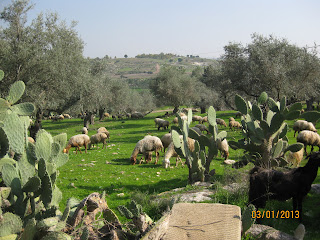