Mount Bental -Look out, it's the Syrians.

About one million years ago, the Golan was an area of volcanic activity. The mountains which we see today are often the remnants of the rims of giant, long dormant calderas. So it is with Mount Bental, which is perched high on the Golan plateau, close to the demilitarised zone and the Syrian border. It was there in 1973 that Syrian forces overwhelmed the small IDF lookout post and it was only the bravery of the defending tank units which stopped - and eventually destroyed - the numerically superior Russian trained and equipped Syrian forces. The site which it overlooked has become known as the Valley of Tears, but that as another story. When you reach the site, you are confronted by the original Israeli lookout post, complete with tunnels, viewing platforms and machine gun mountings. Audio points in English as well as Ivrit allow you to imagine what it was like and help you to understand what you are looking at - and where. The land surrounding the mountain is part of kibbutz Merom Golan, which had to be relocated to the 'safe/ West side' of the mountain in 1972, due to the constant shelling from Syrian artillery. The story of the kibbutz and what happened to it in 1973 is also told via audio. 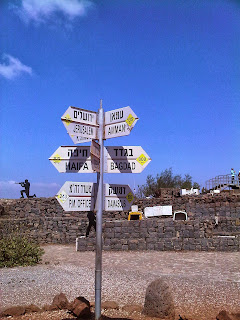 The site also has what is perhaps the highest cafe in Israel, Cafe Anan (Cloud cafe), where the iced coffees were more than welcome!

Close to the carpark is a signpost, one of a number in Israel, showing you where you are relation to other well known locations throughout the middle east and the wider world. Sadly, this merely serves to show you how far or close you are to major conflict points today. The signpost is surrounded by sheet steel cutout models of soldiers, which merely serves to remind you of the history of Har Bental.

The walk from the car park to the site takes you past numerous sculptures by ares ident of Merom Golan, who has made them all from recycled tank parts. They are witty and well done, but also a sad reminder of the history of this fascinating site.

Mount Bental can be reached by road just south of kibbutz Merom Golan, off road 959, North East of Katzrin
Posted by RCEU at 03:18