There can be few sites in Israel which pack in quite so much, in terms of history, bible, walks, activities camping and geography as Park Hayarden,which includes the biblical site of Beit Tsaida.
Captured from the Syrians in 1967 ( you can still visit their forward lookout points) it is now difficult to imagine what this are must have been like just a few decades ago.

Since then, KKL had planted the area with eucalyptus groves, then cut them down to make this delightful spot. Subsequently, archeologists from around the world have worked at the site, as it is of major significance to both Judaism and Christianity.

The small excavation site has revealed a Bronze Age Citadel, and we know that the site, then called Geshur, was captured by Joshua (or perhaps not, depending on the enigmatic statement in the Book of Joshua). It then became the home town of one of King David's wives, was destroyed by invaders from the north (nothing new there, then) and was rebuilt as a Roman border town. Lying at the crossroads of major routes north-south and east-west, it is easy to see why it was such a significant location. You can see the remains of the citadel, houses and shrines, all built in local basalt.

A short walk, or even shorter drive, will take you to one of the numerous car parks from where you can take six way marked tracks, in varying length from 400 m to just over 2km. There are numerous picnic spots, barbecue pits and camping areas. The park is situated amid some of the streams which flow into the Jordan and all of the tracks run alongside one or other of them, sometimes more than one. 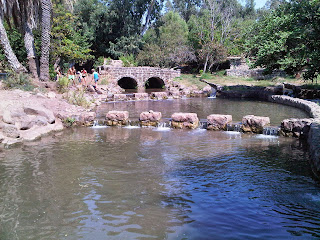 You will also see the remains of a ancient water mill and not so ancient plastic bottles, but that's Israel for you! There are fishing opportunities as well, for those of a pescatorial bent. This would be carrying on an ancient tradition, as it would appear that the original Kinneret lapped the base of the citadel, some 1.5km north of the current shore.

Park Hayarden is situated just off Route 888, about 1km north of its junction with Route 87.
Posted by RCEU at 03:21