Meshushim Stream - Israel's not so Giant Causeway, home of Asterix the Hebrew?

We all know that the famous Giant's Causeway in Northern Ireland was created by rapidly cooling lava, with a hexagon being the most efficient shape for the crystalline lava to form into. What you might not know is that the Golan has it's own version, too. Admittedly not quite so spectacular but certainly worth a detour, especially if you want to find out if Asterix could have been Jewish. Let me explain a little more...........

The Meshushim (hexagon) Stream is the longest in the Golan, feeding into the Jordan eventually after a 35km journey. It carves its way through the Yehudiyah Nature Reserve, itself worth a serious visit, and after a series of gentle waterfalls arrives at the natural pool, surrounded by basalt walls which have formed into hexagon shapes - meshushim in Hebrew (from shesh = six: geddit?).

The drive up to the entrance to the park is a bit of a bone shaker, but the road is wide and easy to drive. From the car park you have a number of options. The easiest is the walk to two amazing lookout points, where you might see eagles, vultures or even a wild boar (although they are really very shy animals, so they tell us). Another, more strenuous, trail, takes you down to the pool itself and is only recommended for those prepared for the one hour round trip. Take lots of water and obey the signs about not jumping off the rocks into the pool. By the way, the water feels VERY chilly! 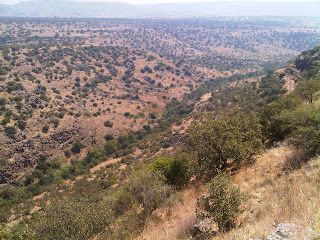 So what about Asterix, you ask? Well, the park also has a path leading to one of the few dolmens found in the Golan. A dolmen, as all you prehistory students will know, is a stone burial chamber, usually consisting of large upright stones with a stone lintel, as sort of mini Stonehenge. It would have been covered with earth, making a sort of inverted cup shape, but over the millennia, this has been washed away, leaving just the enormous stones in place. They have been found all over Europe, Southern Russia and even as far as China. Now, Asterix had a friend called Obelix, who was a menhir delivery man and menhirs are the individual upright stones found all over Brittany, the British Isles and elsewhere (think Stonehenge). They may even be likened to the 'matzevot' found throughout Israel. So, is it too much to think that with Obelix delivering menhirs and menhirs and dolmens being much the same sort of thing and menhirs and matzevot being much the same thing, perhaps it should be Asterix the Hebrew? 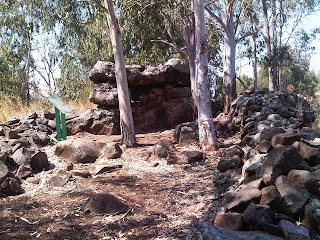 Even if this flight of fancy isn't your sort of thing, visiting a burial site from perhaps 15,000 years ago is quite a sobering thought.

the Meshushim stream and park  can be found as a turning off route 888 a little north of Had Nes. If you are thinking of taking public transport, it is a VERY long walk form the nearest bus stop on Route 888 and is only recommended for the hardy - with lots of water to drink.
Posted by RCEU at 03:44