The Supreme Court, Jerusalem. Proving that no-one is above the law.

For many years after the founding of the State, the Supreme Court was housed in unsuitable premises, but in 1984, the Rothschild Foundation (called Yad Hanadiv in Hebrew) made a formal offer to the Government to donate a permanent building for the Supreme Court. As you can imagine, the offer was gratefully accepted and there was an architectural competition in 1986, attracting entrants from all over the world. The winners, from Israel, were the brother-and-sister team of Ram Karmi and Ada Karmi Melamede from Tel Aviv. Being built surprisingly quickly, the new Supreme Court building was dedicated on November 10, 1992. 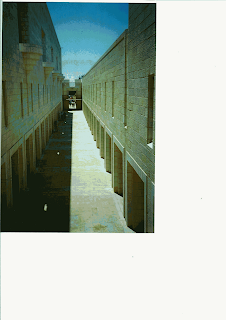 When you walk around the magnificent site today, you can only marvel at the ingenuity of the architects, who combined biblical and Talmudic legal references into the design. For example, The site of the building would be in Kiryat David Ben Gurion, adjacent to both the Knesset, the legislative branch of government and the executive branch of government but, because the law should always be above the government, the building was put on a site physically above the Knesset, so that the MKs should always be aware of their position (well the idea was good, ast least!) The building integrates post-modern architectural elements, too, reflecting Jerusalem’s rich architectural history and is truly an exciting element of anyone’s stay in Jerusalem.

Tours are held daily and English tours are usually at 1200, but check the details for the day you plan to visit, in case of unscheduled changes.

You can access the building from various directions, but I think it's easiest from Sderot Rothschild or Sderot Yitzchak Rabin.

To view a google map of this site, please click here.
Posted by RCEU at 10:51