The Jerusalem Biblical Zoo. You may enter two by two, or even seven by seven!

The very first public zoo in Jerusalem was opened as a petting zoo for children in 1928 and was, to put not too fine a point on it, pretty grim. As the city grew and ideas about zoo management, developed, the Jerusalem Biblical Zoo, as it is still unofficially known, moved and expanded. It now stretches across an area of 25 hectares (62 acres) in a delightful valley on the southern outskirts of Jerusalem, surrounded by green hills and new neighbourhoods. The zoo, now named for its munificent sponsors, the Tisch family of New York, is built around a small lake which is located near the entrance. The artificial lake relies on recycled water and is fed by several linked pools and waterfalls. It is artfully surrounded by spacious lawns and shady beauty spots, often the home to the zoos feathered inmates. 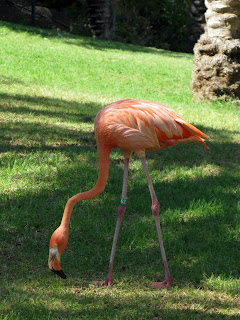 The zoo is built on two main levels which house most of the animal exhibits. The main, circular route extends the length of both levels, connecting most of the sites on the zoo grounds. Several side paths connect the two levels, allowing you to decide on your own route and exhibits are cleverly situated along these paths as well.

Inevitably, the zoo’s main emphasis is placed on animals mentioned in the Bible. Sadly, the majority of these animals became extinct in Israel, mostly in the twentieth century and some within living memory, due to indiscriminate hunting, habitat destruction, and the feverish – and often uncontrolled, pace of construction and development. These animals include creatures like bears and lions, the Persian fallow deer and Arabian oryx, the cheetah and the Nile crocodile.

An additional emphasis in the zoological collection involves the preservation of endangered species from around the world. In this group the zoo is home to the Golden lion tamarin, the rarer of the macaws and cockatoos, the ibises, and the Asian elephant and there was great excitement in Israel when a baby elephant was born in December 2005. Of course, it's grown a bit since then, k'nein a horah!

Most of the animals in the zoo live in large enclosures, designed to resemble – as close as possible - their natural habitats..

A few of the animals were confiscated from smugglers, but the vast majority were born in captivity. The zoo management make it a matter of policy that none of the animals in the Jerusalem Biblical Zoo were collected directly from the wild. They firmly believe that the capture and removal of animals from the wild for the purpose of displaying them in captivity is unusually cruel, as well as illegal. Good for them!
Drive to the zoo from the Begin Route, past the Malcha Shopping Mall and the Jerusalem Technology Park to Derech Gan Hachayot, at the junction of Sholov and Moda'i. There are good bus links and, when it runs,  the Tel Aviv Jerusalem railway stops at the new Zoo station

To view a Google map of this site, please click here