When Nazis lived in Tel Aviv - the Sarona Templars Colony

In 1871, the first group of Templars, a radical German protestant group, who had been removed from mainstream Protestantism by the authorities, established the colony of Sarona, which they pronounced ‘Sharona’. Expanding and prospering under the Ottomans, the Templers remained committed German nationalists and when, in July 1918, Allied troops occupied the German settlements in Palestine, its inhabitants were interned in Egypt. In the 1920s Sarona was still a small settlement, but it prospered because of a ready market for its excellent produce. The first community, outside of Germany, to have a Nazi party chapter,  the German Counsels' office in Tel Aviv flew the Nazi flag at full staff!
The Templars sold their produce, especially Jaffa oranges (there’s an irony!) back to Germany, but their Reichsmarks were valueless as they were not recognised in Mandate Palestine. They opted, in many instances, to barter their produce for imported goods. In Tel Aviv, a Mercedes could be acquired in exchange for 50 cases of oranges - a snip!
After the War broke out, the Mandate government turned Sarona into a large internment camp. In July 1941, with Rommel appearing likely to overrun Palestine and join up with this ‘Fifth Column’, 198 people from Sarona, together with almost 400 from the other internment camps were transported to Australia where they remained until 1947. After the war, Sarona became a British military and police base and was the site of the first ever frontal Haganah attack on a British installation.
During the War of independence, the base was dubbed HaKirya because it contained the provisional capital of Israel until Jerusalem was secured and declared the capital. The Haganah and then Israel Defence Forces also used the Templar buildings as their first headquarters. Over the years, the military base's land area shrank, due to the high land value and sale to private companies, although the government retains many of its offices in the Kirya Tower in the southern Kirya. 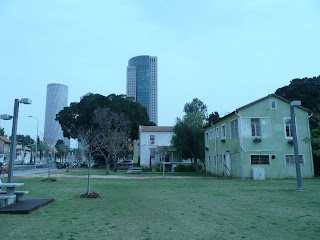 Thanks to my friend Sue Young for this photo.
The houses are currently being restored with a view to creating a village under the gaze of the three massive towers that make up the Azrieli Centre, which you can see in the above photo. Many of the houses are still dilapidated but even so it is easy to image what life was once like. At the time of writing (March 2010) there are gardens with picnic areas and on the tables are images of life in the original days of Sarona. Eventually all the houses will be restored, additional facilities will be provided and new people will start to live in this almost forgotten community.
The site is at the corner of Da Vinci and Kaplan and the area is called both HaKiyra and Machane Rabin, in memory of the assassinated prime minister.
Parking is not great but buses are plentiful.
To view a Google map of this site, please click here.