A walk on the wet side - Hezekiah's Tunnel in Jerusalem

Hezekiah's Tunnel or, as some people call it, the Siloam Tunnel, was dug just before 701 BCE during the reign of King Hezekiah, underneath the Ophel area in Jerusalem and features in the story you can read in Tanach, in 2 Kings 20 and 2 Chronicles 32. When you walk through it – and I really hope you do – you have to keep reminding yourself that this is one of the few intact, 8th century BCE structures in the world that the authorities (whoever they are) will allow you to!
The tunnel, leading from the Gihon Spring to the Pool of Siloam, was designed to act as an aqueduct to provide Jerusalem with water during an impending siege by the Assyrians, led by Sennacherib. The curving tunnel is 533 m long (just under 1750 ft), and conveyed water along its length from the spring to the pool on a 0.6% gradient.
An inscription found in the tunnel says that it was excavated by two teams, one starting at each end of the tunnel and then meeting in the middle. I know this sounds like the joke about the navvy who bid to dig the Channel Tunnel with a mate for £100 each by starting at each end and digging towards each other, but it this case, it really happened! It is clear that several directional errors were made during its construction as the tunnel isn’t in the straight line it probably should have been. Once upon a time we were told that the tunnel may have been formed by widening a pre-existing natural cleft in the limestone, called a karst, but it seems that this idea has been rejected by scholars now. 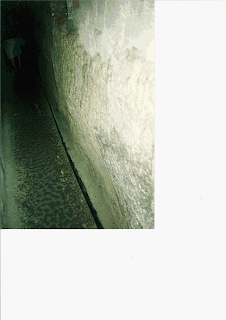 The water reaches up to about 0.75 m (2.5 feet) even in the summer and the hike through the tunnel takes about 45 minutes, The tunnel gets very low (about 1.2 m, 4ft or so) and can be very narrow, so there is a health / width warning here.. The floor is fairly smooth, as are the walls, but there are a few rough rocks, so take care.
If you do decide to go, you should bring a torch, with spare batteries. You should also dress appropriately, with shorts and sandals, or shoes that you do not mind getting wet. Watch out for that low roof and it’s my advice that it’s probably best to go with a tour group.
You can get to the tunnel ends via Ma'alot Ir David or Derech HaShiloach, just south of the Old City.
To view a Google map of the tunnel, please click here
Posted by RCEU at 10:30