The Hecht Museum, Haifa. A hidden gem in the North

Dr Reuben Hecht was one of the most influential people in the pre State and early years of Israel. Scholar, businessman, diplomat, academic, advisor to Prime ministers: he was surely one of the most modest and yet most powerful people in Israel.
Over sixty years he also amassed one of the most exceptional private collections of ancient archaeological artifacts and modern art. But far more than that, he bequeathed it all to the university he helped to found in Haifa.
The Reuben and Edith Hecht Museum, to give it its full name, is housed within the main university complex and has two distinct sections, those of the ancient archaeology of the region and of art, mainly of the Impressionist period and of Jewish artists who died in the Holocaust. The former demonstrates the connection between the Land and the People of Israel over thousands of years, with special reference to the fine artistic work of its inhabitants and the lives and times of the Phoenicians. 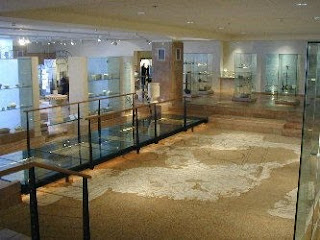 The ability to walk amongst the reconstructed ruins of a Phoenician settlement, recreated in the museum, to see the remains of a ship nearly two and a half millennia old or to examine a wonderful ancient synagogue mosaic, should not be missed. But nor should the chance to see works by Monet, Manet, Pissaro, Van Gogh and Modigliani and a host of other Impressionist ‘greats’ - all tucked away in Haifa.

There is free admission and there are guides available in English. If ever a museum deserved the accolade 'hidden gem', this is surely it!

You can access the university main building on Route 672 on Sderot Abba Hushi, close to its junction with Route 705.  You can't miss the tower: it's visible from miles around.  It is also easily accessible by bus from the centre of Haifa and the railway station.

To view a Google map of this site, please click here
Posted by RCEU at 08:25