After the 2nd century Bar Kochba rebellion against the Romans, Jews were banned from Jerusalem, the city was ploughed up and renamed and another great Jewish Dispersion began. Many of the exiled Jerusalemites headed north to the Galilee and settled in the Golan. Over the next two hundred years, they built nearly three dozen thriving, prosperous settlements in the region. One of them was Qatzrin (sometimes spelled Katzrin), now the capital and main administrative centre of the region. The area was first surveyed well over 100 years ago, initially by Sir Lawrence Oliphant (who I've written about in the section on the names behind the streets), who was trying to encourage Jewish emigration from Eastern Europe and then by the German engineer Gustave Schumacher, looking for the best route for a railway from Damascus to the Mediterranean Sea.

Several buildings at Qatzrin have been restored, allowing visitors to step back to mishnaic times and actually experience village life from over 1500 years ago. 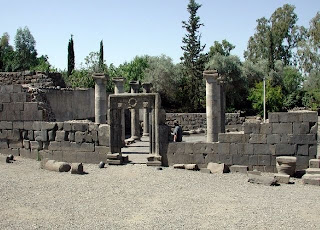 Image courtesy of www.HolyLandPhotos.org.
Ruins on view in the ancient city include typical 'three roomed houses', remains from the town's main synagogue and its impressive arched entrance, only rediscovered in 1968, engraved symbols of the Jewish inhabitants and inscriptions dedicated to well-known figures of the period. Rabbi Eliezer HaKappav established the synagogues of this region after the exile, and Qatzrin best exemplifies the workmanship of these houses of learning from around the period of the Talmud's completion. It appears that, at one time, the synagogue underwent expansion and a second storey was added, possibly to accommodate women. It seems that the Synagogue Building Committees may have an ancient and honourable lineage! The site is a fascinating one for all the family and being close to the famous Golan wineries doesn't hurt, either!

Access to the ancient site could not be easier. The carpark is directly off Route 9088 which runs between Routes 87 and 91, near the industrial area.


To view a Google map of this site, please click here