If you are interested in how the early settlers formed defence groups and how they developed into the Haganah, this must be the museum for you. The museum is located on the site of the former home of Eliyahu Golomb, one of the founders of the Haganah and the ground floor rooms have been restored to recreate a sense of how the family once lived with biographical exhibits on Golomb's life – if that’s the sort of thing you like. 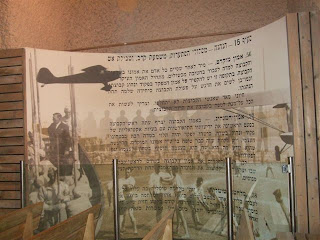 The upper floors lead you along a winding passage, with some thirty displays, many with multimedia narratives tracing Israel’s defence history from 1878, when the first "shomrim" or watchmen were organised to protect the early settlers, through the Haganah’s establishment in June 1920, the quelling of disturbances in the 1920’s and 30’s, and the struggle against the Mandate authorities up to the War of Independence.
Although most of the labels are in Ivrit, explanatory information is provided in English and it is possible to select an English voice-over for the video presentations.

On the third floor, you see the various ways the Jewish fighters hid arms inside farm machinery to escape British detection, and how they secretly made hand grenades and Sten guns in clandestine kibbutz workshops.
The museum is often full of visiting groups of soldiers and school visits, but they are - usually – well behaved. An English accent is probably not your best asset, as the designers make it quite clear whose side they are on!


The Haganah Museum is at 23 Rothschild Boulevard
Tel Aviv, opposite Independence Hall, right in the centre of the older part of town. Parking is a challenge but buses are plentiful.
To view a Google map of this site, please click here