Located deep in the Negev, about half way between Beersheva and Eilat, you will come across the country's largest nature reserve, one of the wonders of Israel - and perhaps the world. I'm always staggered by it, whenever I see it!

The Ramon Crater is some 40 kilometres (25 miles) long and 2 to 10 kilometres (1-6 miles) wide, shaped a bit like an elongated heart. Mitzpe Ramon the only town in the area, seems to peer over its northern wall. Scholars tell us that the name Ramon comes from the Arabic "Ruman" meaning "Romans", probably referring to a track or road which the Romans built during their long occupation -  or perhaps it doesn't. I don't think it really matters.

The crater formed - somewhat over five thousand years ago -when the ocean which covered the Negev began to move north. At first, this created a hump-shaped hill, which eroded slowly. Much later, the Arava rift valley formed, when tectonic plates shifted. As rivers changed their course, they carved out the inside of the crater. It is 500 m ( 1500m). deep, and the mountains and rocks have fantastic colours and shapes. High and impressive mountains rise at the edges and two beautiful table mountains - Har Marpek and Har Katom form the southern wall. A black hill in the north, Giv'at Ga'ash, was even once an active volcano: fortunately, no more!

This is the only place in the world you see pipe shaped prisms made of heated sand that turned into liquid. Cooling, the molten mass naturally formed rectangular and hexagonal prisms. Weird! 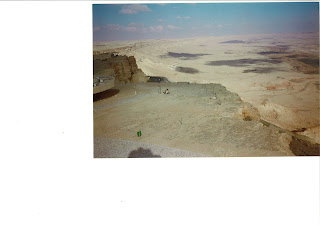 I suggest you start your visit from the excellent Mitzpe Ramon Visitors Centre, located on the edge of Ramon Crater. An audio-visual show describes the formation of the Negev and its craters, illustrating the history of settlement in the Negev, as well as its flora and fauna. Follow the trail along the edge of the Crater. About half way along there is a "bird balcony" which hangs out over the crater and offers the best view, whilst you see birds flying under your feet rather than overhead. After the paved trail ends, walk safely along the crater edge path leading to a small observation platform.

To view a Google map of this location, please click here
Posted by RCEU at 14:00