Nestling on the coast just north of Naharia is a small National Park with much to recommend it, whether your interest is Tanach, history, ornithology, biology or just swimming in safe and shallow or deep sea water pools. In short, Achziv offers everything required for an enjoyable and relaxing day out, whatever the season.
The beautiful coast with its natural bays - so rare in Israel – allows you to spot sea anemones, sea urchins, and small octopi hiding beneath the rocks. In July and August the sea turtles leave the water to lay their eggs on the sand, but please don’t‎ even think of disturbing them.
Just a few metres offshore lay a number of small islands, called (rather unexcitingly) the Achziv Coast Islands, which form a nature reserve in themselves and are what remains of an ancient sandstone ridge. Now only the peaks are above water level, but the entire ridge was once part of the mainland. Twitchers and birders will know that during the summer months, common terns nest on the islands: the rest of us will just be fascinated in their flight and breeding habits.

Achziv National Park also contains the ruins from the ancient city of Achziv, mentioned in the Bible as one of the cities belonging to the tribe of Asher, and then a Jewish settlement discussed in the Mishnah and Talmud. During early times, techelet, the blue/purple dye produced from snails collected along the Achziv coast was an important source of income for the residents. The finds from the Haifa University excavations at Achziv can be seen in the Hecht Museum in Haifa University. 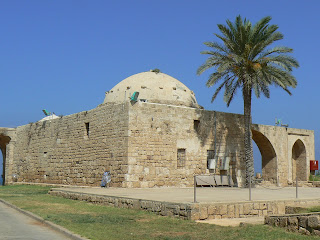 During the Crusader period, this area was called L'Ambert Castle before it fell to Sultan Baybars, who captured Achziv in 1271. Most of the ruins still seen at Achziv are only from the abandoned Arab village of A-Aib, although a few are from the Crusader period.
With well kept changing rooms, a restaurant, picnic areas and a children’s playground, Achziv is certainly worth the trip north. Achziv is just 4 km north of Naharia on Route 4.

To view a Google map of this site, please click here
Posted by RCEU at 10:20