Hazor - from Yavin to Yadin

Hazor, one of the most important sites in our early history was one which also helped to make the reputation of Yigal Yadin, soldier, scholar, archaeologist and politician. Tel Hazor can be split into two parts: the 30-acre (11 ha) acropolis and the 175-acre (70ha) lower city. It seems that Hazor was already important in Abraham's time and was the largest fortified area in the land during the Israelite period (ninth century B.C.E.).
Ideally located on the Fertile Crescent, Hazor traded with cities in Babylon and Syria and its bronze industry used tin brought from abroad. The king of Hazor, who held the title of ‘Yavin’, was considered an equal with the kings of other important centres, such as Carchemish, Aleppo, and Qatana. The Tanach refers to Hazor as "the head of all those kingdoms" (Joshua 11:10). 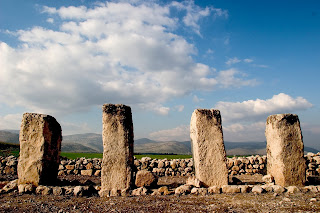 Your visit to Hazor is a trip back through time, as you encounter buildings from different periods: fortifications from the middle Canaanite period; a large building (called the "castle") from the late Bronze Age; a casement wall and gate which some think was built during King Solomon's reign (even naming this type of gate a ’Solomonic Gate’); a late-Canaanite altar; and storehouses possibly constructed at the time of King Ahab.
The waterworks, presumably built during Ahab's reign were designed to provide the residents of Hazor with a steady supply of water even when under siege. When completed, they no longer had to carry water from springs outside the city, but drew ground water from a 45-metre-deep shaft and well, reached by steps without handrails. You decide which was easier!
Finds from Tel Hazor are displayed at a museum at the entrance to Kibbutz Ayelet Hashahar, just opposite the site, which you should visit before going up to the site. The view from the top of the mound is breathtaking and shows just why it was so important.
Hazor can be found on Route 90, 7 km north of Rosh Pinah.
To view a Google map of this site, please click here.
Posted by RCEU at 10:44