When the British Mandate Authorities called on the Jewish community to form a militia in 1941 to prepare for a predicted invasion by Rommel, little could they have imagined what this ‘Striking Force’ – its Hebrew acronym was ‘Palmach’ – would become.

When the danger receded, the British formally disbanded the Palmach, but it went underground, based on kibbutzim and trained hard for the inevitable conflict to come.

The Palmach Museum is really an innovative audio visual experience, where for 90 minutes you can get a small idea of what life was like for the thousands of their volunteers. 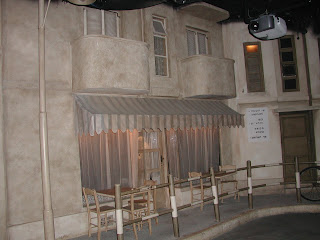 You can also get a potted history of the War of Independence, in which the Palmach provided 25% of the military strength. This development is told through the personal stories of a fictional composite group: sabras, new arrivals and Holocaust escapees, Ashkenazim and Sefardim and you live with them, sharing their good times and bad.

The visit, where you walk through a number of high-tech ‘stage sets’, is conducted in timed groups (remember, this is a ‘museum’ without exhibits) and begins and ends in a commemorative hall for the over 1100 Palmach troops who fell fighting for the establishment of the State of Israel.

The fascinating Palmach Museum can be found on 10 Rechov Haim Levanon on the campus of Tel-Aviv University, next to the Eretz Yisrael Museum.