Ekron was one of Philstia's five cities (the others were Gaza, Ashkelon Ashdod and Gath) and is one of the largest Iron Age sites in Israel. More than 100 oil presses were found here, as well as the Ekron Inscription (confirming the site as Philistine Ekron). To the tourist, the highlights of a visit are the reconstructed Philistine street, featuring an oil press, a potter's wheel, (since many jugs were produced on site to transport the olive oil) and a loom, as apparently there was quite an active textile industry, as well as the Museum of Philistine Culture (yes, they really had some!) 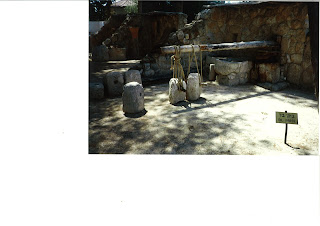 Ekron was first mentioned in Tenach in Joshua 13:2-3 and, in relation to the Ark of the Covenant, in I Samuel 5;10. With the arrival of the Philistines (apparently one of the Sea Peoples who may have arrived from Greece or Cyprus) in the twelfth century BCE, Ekron became a large fortified, urban centre, supplying Egypt and Assyria with huge quantities of olive oil, as much as 700 tons a year - the largest olive oil industrial centre in the ancient Middle East. Liquid was extracted from the crushed olives with the help of weights and log (an example of such an installation can be seen at the reconstructed street). The liquid was then transferred to huge jugs where the oil rose to the top and the water was drained. Tenach tells us the Philistines also had the monopoly on iron working in the Land of Israel during the period of the Judges, preventing the Israelites from metal smithing aad producing better agricultural tools..... and weapons.

Ekron, a fascinating site which proves that the Philistines get a 'bad press', is located on Kibbutz Revadim, off Route 3 , just north of its junction with Route 40, west of Bet Shemesh. route 6 is close, but access is limited.

To view a Google map of this location, please click here.
Posted by RCEU at 05:27