Park Jabotinsky -From Manashe to Ze’ev

Located on the furthest south spur of the Carmel mountains, the Jabotinsky Park site features forest walks, a children’s playground, the Achaim Sculpture Garden, the Shuni Archaeological Museum Fortress, as well as a camp and educational center. The park was named for Ze'ev Jabotinsky, a prominent Zionist militia leader, whose followers broke from the Haganah to form the more right wing Irgun during the British Mandate. The Irgun used Shuni as their militia headquarters and training ground and launched many operations from the site.
Shuni is situated on lands belonging to the biblical tribe of Menashe and is mentioned in the Talmud as the village of Shumi. At the end of the nineteenth century, Effendi Salim Houri, a wealthy Haifa land owner, bought the area, extending his personal property from here to Zichron Yaakov. He added buildings onto the earlier site, one of which was a granary – ‘Shuni’ means granary in Arabic. In 1914 Baron Edward de Rothschild bought it for an agriculture school for new Jewish farmers.
JNF archaeologists have uncovered early Roman baths along with a large amphitheatre, probably used by wealthy pagan Romans who lived in nearby Caesarea. The Christian Byzantines tore down the sacrificial platform, destroyed the stone columns that led to the pool area and instead built an olive press. The theatre is now restored and is used today as an entertainment area for concerts and other activities.
The Romans also built high-level aqueduct to bring fresh water from Shuni Spring, 7 km (4.5 miles) to Caesarea during Herod's rule. The aqueduct delivered water at a gradient of 1:5000, which their engineers had discovered was enough to allow the water to flow without scouring out the channel. 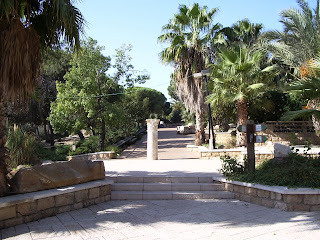 The Park also features the Achiam sculpture museum,with about 90 sculptures in stone, basalt, wood and bronze. His works range over diverse subjects including biblical personalities, women, musicians as well as universal pain and suffering ("Hiroshima," "Auschwitz," "Kaddish"). The sculptures stand on the original Roman mosaic floors, an interesting mix of the ancient and modern.

The museum houses Roman findings as well as relics from the Irgun training camp. Sometimes, former Irgun members are on hand to tell of their exploits.
The Jabotinsky Park, just five minutes drive north of Binyamina on Route 652, is a fascinating blend of ancient and modern history, as well as having lots for families to do and see.

To view a Google map of this site, please click here
Posted by RCEU at 10:29