A Jerusalem house with a history - Bet Ticho

Go for a coffee and cake ( or a yummy salad) at the delightful Bet Ticho in Jerusalem and you might just wonder about the attractive surroundings, as you sit in the shade of the mature trees. The history of the house is certainly worth retelling. 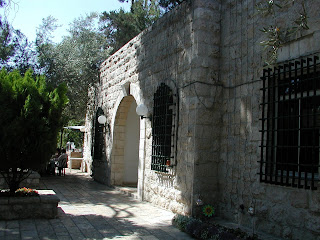 It was built in the late 19th century by Hajj Rashid, a prominent Arab, who sold it to Wilhelm Moses Shapira, a Jewish convert to Christianity. He dealt in ancient Judaica, much of which he manufactured in his own workshops. One of these was a set of narrow strips of parchment which he claimed had been given to him by Judaean Desert bedouin and contained the oldest known version of Sefer Devarim. The British Museum was about to pay £1 million for the texts ( no small figure in those days) when they were denounced as forgeries by a French expert. This saved the museum enormous embarrassment, but Shapira could not take the shame and committed suicide, still protesting his innocence. Some scholars now believe that they were actually genuine.
Dr Avraham Ticho was the most eminent eye doctor in Jerusalem, having studied in Vienna before arriving in 1912. He married his much younger cousin Anna, a skilled artist when not helping her husband run his clinic. He treated Emirs and paupers alike and was much loved. When he was stabbed in the anti Jewish riots in 1929, the Chief Rabbinate even issued a notice asking everyone to pray for his recovery! After his death in 1960, Anna decided that, on her demise, she would bequeath the house to the people of Jerusalem.
Bet Ticho can be found at 7-9 Rechov Harav Kook, off Derech Yafo, near Zion Square.
To view a Google map of this location, please click here
Posted by RCEU at 03:00