For many tourists to Israel, one of the highlights is the delightful drive on Route 672 and Route 721, south from Haifa through the Carmel National Park. Usually we drive straight through, or perhaps stop in the charming Druze village of Dalyat al Carmel. However, we would be missing one of the loveliest short walks, through a part of the Carmel range which - at least for those in the tourist industry - has become known as 'little Switzerland'. Other parts of Israel are also called the same thing. 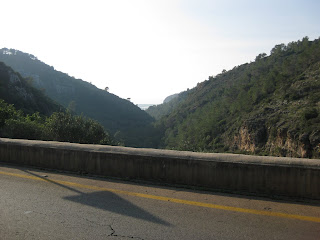 The route you will follow is a path which goes through wooded cliffs and natural stands of oak and terebinth (the turpentine tree!). You might think that this is just a narrow road in the heart of a nature reserve, but in the not too distant past, this was the road used by residents of the Carmel who lived on a hill south of the kibbutz Bet Oren. In 1938 a car carrying Jewish watchmen and two women to the Carmel forest was attacked by Arab terrorists and, after a long battle bravely fought, the watchmen were sadly killed. The two women and the driver managed to escape and alert British troops in the area, who attacked the gang and captured two of them. All along the track, the views are breathtaking, if not quite Swiss. You can find it by driving south from Haifa on Route 672, past Haifa University and, between km post 42 and 43 turn south (right) onto a narrow road which leads to a campsite and network of paths. Your path will be the one marked with red waymarks.The delightful drive on Route 721 can be taken direct from Route 2 at Atlit Interchange or from Route 4.

To view a Google map of this route, please click here