Korazim -The Cathederal of Moses

The ancient Galilean city of Korazim (or Chorazim, depending on your transliteration) was first mentioned in the Second Temple period, when it was famous for the high quality of its wheat crops. We know it grew in prominence in the Mishnaic and Talmudic periods and features in christian writings as it, along with the local cities of Bet Zaida and Kfar Nahum were cursed for not accepting the teachings of a notable local rabbi. It would seem that his teachings continued to be discounted by the locals, as today, the most fascinating part of your visit to the site will be to the Byzantine synagogue, built around 1600 years ago, some 300+ years after his life. It was constructed of basalt, the volcanic rock so evident in the area and on it you can see very ornate carvings of plants, people crushing grapes underfoot and animals. Easily visible too are lions and an eagle as well as a bird pecking at a bunch of grapes. 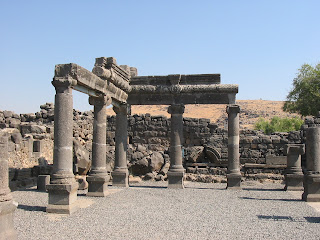 The so-called 'cathedral of Moses' is actually an armchair carved out of the rock and most likely the seat for a very important community member. An Aramaic inscription has survived, but the cushions which would have made the seat somewhat more comfortable have, sadly, not!

The Israel Parks Authority have reconstructed a mikvah, two ancient homes and an olive press, showing the life and times of the early inhabitants. We were told that the shy Syrian hyrax can sometimes be seen sunbathing on the rocks or hiding beneath the jujube trees which grow in the vicinity, but it must have been one of its ‘shy days’ when we visited!
Korazim National Park is on Route 8277, just 10 minutes drive from Amiad junction on Route 90, north of Tiberias.
To view a Google map of this site, please click here
Posted by RCEU at 02:42