At Tel Arad you can just never tel!

If you are looking for a Cannanite city, a Solomonic outpost, a site where Hashem and an Asherah were worshipped at the same time and a link to our earliest history, then Tel Arad is for you. On a site occupied for over 5,000 years, a large Canaanite town was built. We are told in Bamidbar 21 that its king drove the Israelites back when they tried to advance into the Promised Land from the south. After its capture by Joshua, it was part of the tribe of Judah, and, apparently the "children of the Kenite" (Moses' father-in-law, perhaps) lived in the town. The town was developed and fortified probably by Solomon who, strangely, built a temple to Hashem on the site of a hilltop sanctuary of the Kenites - not quite the story we have all been brought up with, but perhaps he was just keeping the non Jewish residents happy: a sort of biblical Community Cohesion, perhaps?  Shortly afterwards, in 920 B.C E., it was captured by Pharaoh Seshonq, the Shishak of the Tanach, but was soon recovered by the kingdom of Judah, to which it belonged until its fall in 586 B.C.E. Its location on important trade routes meant that Arad retained its importance into the Roman period, with King Herod even building a bakery there. Arad was finally abandoned only after the Islamic conquest in the seventh century C.E. 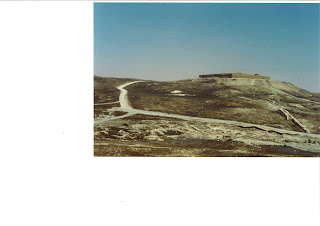 When you visit the site, you will see excavations of the ‘Arad House’, a type not unique to here, but best preserved here. It looks like the Caananites bought ‘off plan’, even in those days. Archaeologists have found piles of broken pots (called ostraca) with writing on them stating that they were ‘for the House of Hashem’ and I leave it to you to decide whether they were used ‘on site’ or just as a label for a sacrifice being sent to the temple in Jerusalem?
Tel Arad, now a National Park, is a fascinating glimpse into a part of our ancient history too often glossed over. Your trip will certainly be worth it.
It can be found on Route 80. Turn north on Route 31, east of Beer Sheva at Tel Arad Junction. It can easily be combined with other trips in the area.

To view a Google map of this site, please click here.
Posted by RCEU at 10:27