Drive along Route 2 heading north from Netanya and you will see – and probably drive straight past –one of ’s most fascinating and delightful national parks, Park Taninim.  Taninim in Hebrew means crocodiles and up to the early part of the 20th century Nile crocodiles, fresh water crocodiles, could still be spotted in the Kabara river (more of a big stream, really) that feeds the nature reserve. Of course, human nature being what it is, the last one was seen in 1907 – and promptly shot! 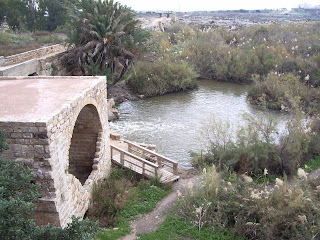 The Romans, of course, realised the benefits of plentiful fresh water in the Kabara valley and designed various methods by which to channel this water to the citizens of , nearly five kilometers (3 miles) away. Whilst renovating the nature reserve preserve, excavators discovered a dam, which utilised three wooden floodgates to elevate the water, and control its flow through ground level aqueducts, chiseled out of stone by Roman crafstmen. The 200 metre long dam created a reservoir of 6000 dunams (about 2500 acres/ 1000 ha), creating a large lake in the Kabara  valley with a virtually unlimited supply of fresh water fed by the stream, springs and runoff from the nearby mountains. As ever, the brilliant Roman engineering solution was very well constructed and a rebuilt version can be seen there today, as can the rebuilt Byzantine era waterwheel for the flour mill which used the power of the dammed river.
Today, the banks of the river and surrounding wetlands provide any visitor with the sight and sounds from herons, cormorants and storks who feed in the nearby fishponds! Park Taninim is excellent for visitors of any age, with easy walks, bridges and dams to explore and birds and fish to view:  a wonderful combination of archeology and a peaceful natural setting (well, if you block out the background traffic sounds from  Route 2) which can be easily explored by foot in about an hour. It’s a little gem!
Although you drive past it on Route 2, the entrance to the reserve is actually from the old Haifa-Tel Aviv road (Route 4) crossing the bridge over the coastal highway westward toward Bet Hananya on Route 6531.


To view a Google map of this site, please click here
Posted by RCEU at 10:52