Walking down Rechov Emek Refaim in Jerusalem and marvelling at the range of cafes and restaurants in what is now 'Jerusalem's Hampstead', you could easily miss a piece of fascinating history. The 'German Colony' was the only settlement actually built by those named -the American Colony rented existing buildings.

It was built in 1873 by German Templars, a breakaway Lutheran sect, whose motto was "Emigrate from Babylon to settle in Palestine" and they actually started a number of settlements in the country. It was built to the traditional 'Strassendorf' system of a main road and grid of smaller streets at right angles off it. How different to the rest of Jerusalem! 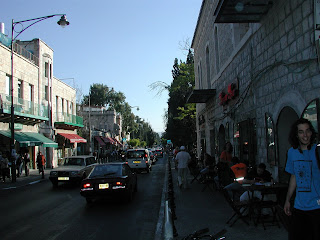 The buildings copied typical German architecture with some oriental additions. The currently empty Israel Fibre Institute (it's been that way for as long as I can remember) was the 'lyceum', where students, including a few Jews, studied for the German matriculation. You can still see the clock with its bell tower, which summoned the students to class. Templar children were sent here from their six other settlements in Palestine and they all lived in Pension Nickolai Schmidt, just along the road. Schmidt called himself "Herr Burgermeister", a rather grand title for such a small suburb. Throughout the street you can still see Gothic Biblical inscriptions, such as at number 16, proving the Templar's religious links.

But what happened to the Templars, especially during the Mandate and the Second World War? What was their attitude to the rise of Nazism? And where are they now?

That,is another fascinating story but, I am afraid, will have to wait for another blog!

Rechov Emek Refaim runs south from its junction with Derech Bet Lechem for about 3/4 mile (1 km).

To view a Google map of this location, please click here.
Posted by RCEU at 03:53