The Alexander River National Park for a total turtle experience.

Most rivers which empty into the Mediterranean in Israel are either dry in summer, or have had most of the sweet water extracted from them. One of the few exceptions to this is the Alexander River and this has allowed it to become one of Israel's newest National Parks. Sited on the northern bank of the river at its mouth, you will find eucalyptus groves and pleasant picnic areas. 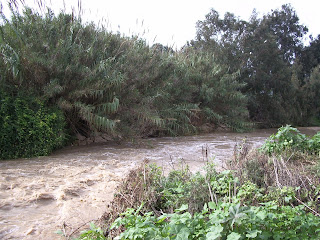 If you are keen on wildlife, you will not want to miss the soft-shelled turtles, which can grow up to 1.2 metres (over 4 ft) in length and weigh 50 kg (8 stones). On the small hill in the park the ruins of an ancient customs house can be seen: probably where taxes were paid as goods were brought down to the coast on rafts. In Springtime the hill is carpeted with wild flowers.
Close by you will find the Bet Yannai coastal area and this is also worth a detour. North of the beach can still be seen the remains of a quay built in 1938 during the mandate period. It was ostensibly constructed to unload fertiliser for the neighbouring orchards and orange groves. In truth, it was actually built to allow clandestine Jewish immigrants to land at night in some degree of safety.
As the park is still new, access can be a little challenging. You should turn west at the Kfar Vitkin junction on Route 2 between Netanya and Hadera, driving over the bridge and carefully turning right off the road, as there is not yet an official turnoff. Indicate you're turning right as early as possible, as other drivers behind you might not know what you intend to do!

To view a Google map of this location, please click here.