B'rechat Ram ( the Ram Pool) - The story of a cool pool

The Israelis who rediscovered this pool of sweet water on the Golan, after the Six Day War, saw it as another, deep, volcanic crater which had filled with Mount Hermon's meltwater. There were many legends that grew up around the pool. 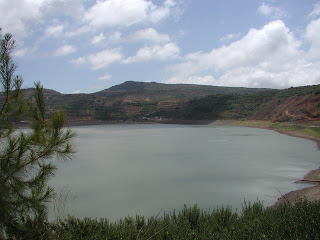 Some people claimed that it was part of an ancient network of underground channels and springs dating back to the time of The Flood. Others stated that it was the route which Moshe tried to use when he found out that he would not be able to enter the Promised Land. He was going to try and use the pool - and the supposed channels- to swim into Banias, which is not too distant. Early visitors found an ancient temple on the top of Mount Hermon and imagined that the pool had been dug by local villagers, so that pilgrims could wash their dusty clothes and bodies. A more exotic story recounts that the snows which fall in the Golan acted as a cooling blanket to Hermon's huge bulk. When Spring comes and melts the snows, the mountain is exposed to the glare of the sun. In order to keep the mountain cool and 'comfortable', it bathes its feet in the pool.
As you can imagine, all of these theories are wrong. The water is meltwater which surfaces here, the pool is not a volcanic crater, but is formed in sedimentary rocks and - just for good measure - the pool is actually quite shallow, only some 8 - 10 metres deep (although that seems quite deep enough, thank you!).
Whatever the 'real' story, a visit to the pool and its beautiful Golan Heights surroundings, will be well worth your visit. You can walk all round the pool or along the waters edge. Take Route 99 from Qiryat Shemona to the Arab town of Mas'ada. Turn south onto Route 98 and, before the junction with Route 978, the road to the car park and observation point will be well marked.