Ein Afek Nature Reserve. Look out for the buffalo, Bill.

Just north of Haifa, you will be surprised to find the last vestiges of the Nahal Na’aman swamps, which used to extend far to the north and inland. The Afek spring once powered a crusader built water mill, but now it flows into ponds, which are the homes to teeming flocks of migrating birds, especially in the migration seasons.
A wooden walk way allows you to take a forty five minute stroll amongst the reeds, bulrushes and other water loving trees and shrubs – quite a rarity in Israel. The crusader fort, although not in the ‘big league’ of their castles in Outremer, as they called Israel and the surrounding lands which became their Kingdom of Jerusalem, apparently afforded an excellent lookout point in this flat, swampy area. This fact was not ignored when, in 1936 at the time of inter community riots, the British Mandate forces built another, far less elegant concrete structure on top of it! 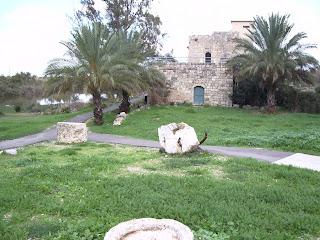 Deciding that what the reserve lacked for its water were water buffalos, the Parks Authority introduced seven beasts from the Hula Nature Reserve in the early 1980’s and they have thrived in their specially created pond area. Don't worry, they seemed quite oblivious to us, when we visited.

With excellent picnic areas under the trees, especially on the ancient tel, safe and easy walking routes and an ecology guidance centre to explain the flora and fauna, your visit to Ein Afek will be well worth the drive.

To find Ein Afek, drive north from Haifa on Route 4, to the northern outskirts of Kiryat Bialik. At the junction after the turn off to Route 79, take the signposted right turn to the reserve, driving past the cemetery. You can get there by bus from Tel Aviv or Jerusalem, but it will need several changes and then quite a long walk. It is about 4-5 km from the nearest railway station on the Haifa suburban service.

To view a Google map of this site, please click here.
Posted by RCEU at 02:09