There can be few museums where the oft quoted phrase ' step back in time' can be more appropriate than the Jerusalem Natural History Museum.

The Museum is now housed in a quiet part of the German Colony in Jerusalem, in a building which has its own story to tell. The Villa Decan was built in the 19th century by a wealthy Arab merchant, but by the start of the 20th century it had been turned over to the Turkish Governor, then requisitioned by the British Mandate authorities after the First World War and finally becoming an Officers' Club. Abandoned after 1948, it became a centre for nature studies in the 1950s, opening to the public in 1962, since when it seems to have become 'the museum that time forgot' 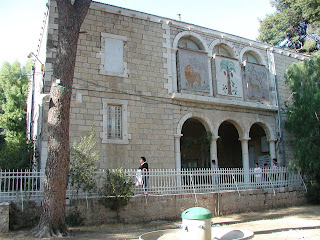 The dozen or so display room show an eclectic mix of models of the human body, skeletons, geology and gemstones, stuffed birds and animals of Israel past and present, a diorama of the Hula Nature Reserve, dinosaur eggs 'over 5000 years old' and other similarly ancient exhibits.

A separate building houses some small animals, both domestic and wild, but visits on warm days are not especially recommended for those with a weak constitution. There are also 'hands on' displays showing the effects of earthquakes and tsunamis as well as explanations of what to do should an earthquake strike - as it has in Israel before. The museum seems to be very popular with young school parties and it is not difficult to see why.

Outside, the gardens offer shade under mature trees and - in a final example of local museum curating of half a century ago - a small display showing bees hard at work in a beehive.

The museum is a charming diversion and a fine example of the evolution in museums we have witnessed in the past fifty years, of which there are many fine examples in Israel, as I have noted. It can be reached on Mohilver Street, at its junction with Dor ve Dorshav Street, just a few minutes walk from bustling Emek Refaim Street.

To view a Google map of this site, please click here.
Posted by RCEU at 11:34