A visit to the Shrine of the Book in is always worth a trip, but for a real understanding of the people who wrote the scrolls and how they lived, you really should take a trip to Qumran, on the edge of the .

There had been small settlements in the desert regions of during the Israelite period, until the Babylonian conquest. But in the second century BCE a Jewish sect called the Essenes moved to the area, according to many historians. They led communal lives, and practiced an ascetic life as they waited for the Messiah. It was destroyed in 31 BCE by an earthquake and was rebuilt about 4BCE.  The Romans destroyed it in  68CE and made use of the site as a military fortress, as it had a commanding view over the northern section of the . 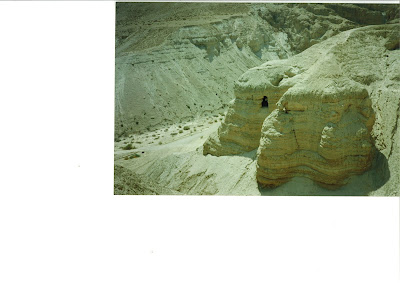 The site was eventually abandoned about two thousand years ago.  In 1947 a young Bedouin boy who was chasing after a goat entered a cave.  Here he discovered jars containing scrolls which scholars date all the way back to the Essenes.  The famous work by Proessor Yigal Yadin did much to bring Essene culture and beliefs to light, but there is certainly more to be learned.

The scrolls give an excellent picture of life in the community, which is augmented by archeological finds.  Excavations at have uncovered the mikvaot, 'scriptoria' (rooms used by scribes who wrote the scrolls), the refectory 9 communal eating seemed to be a feature of Essene life) and other public buildings. Of course, there are now archaeologists who think that the whole premise is false and the site was really a seasonal wool working industrial location, but that would just spoil the entire story, wouldn't it?

You can visit the fascinating site , which is located very close the northern end of the on Route 90.