Berlin in the 1920's was the powerhouse for a radical new movement in architecture.  The driving force was a group of Jewish architects who worked at the 'Bauhaus' and it is this name which gave rise to the movement.  During the 1920's and 1930's, as they wisely left Germany for what was then Palestine, Tel Aviv - literally overnight - adopted their style to define the character of the new "Jewish" city on the Mediterranean.  By the mid-1930's it was the only city on earth being built entirely in the International Style - its simple concrete curves, boxy shapes, small windows set in large walls, glass-brick towers and sweeping terraces all washed with white.  Viewed from the air, Tel Aviv appeared as a vision of startling white, hence the name, "White City."  UNESCO, which once voted to equate Zionism with racism, recently designated the "White City" a World Heritage Site. 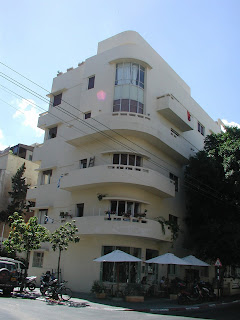 Almost every Bauhaus building in Tel Aviv is an architectural landmark - a delight for visitors, if sometimes a nightmare for owners.  Sadly, many are in disrepair, but the municipality gives generous subsidies for restorations. Hundreds of "White City" buildings have been restored in recent years, many becoming flats, offices, private houses, restaurants and hotels.  One of the loveliest restorations is that of the former Esther Cinema in Dizengoff Circle, reborn as the "boutique" Cinema Hotel, retaining its sweeping staircases, tall windows and curving walls, plus dozens of design details that recall its heritage.

Dizengoff Circle is at the junction of Dizengoff and Reines streets.