One of the many benefits which the Jewish National Fund gives to Israel is the many parks and recreation areas, well tended and now maturing.  One of those is Park Canada which, you will easily guess, was sponsored by the Canadian JNF!  The park actually stretches over the entire eastern edge of the Ayalon Valley and the foothills of the Judean Mountains.  This area has had more than its fair share of battles and conquests, as it held a key position on the way to Jerusalem. Joshua, Judah Maccabee,Saracens and Crusaders all passed this way and the War of Independence left the area a 'no man's land' until after the Six Day War, which brought it finally into Israel.  The park stretches over thousands of acres and includes antiquities, a ruined Crusader fortress, Castellum Arnold and a Bar Kochba period cave hideout. 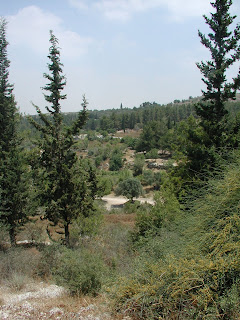 The central part of the park and the prettiest is, perhaps, Emeq Hama'ayanot - the Valley of Springs - with remains of water channels and a tunnel which was dug nearly two thousand years ago to reach the spring.  In the rainy part of the year, the vegetation is lush and your walk will be accompanied by the sound of flowing water.  Even in the height of the summer, the end of your walk will bring you to ma'ayan hatmarim-  the palm spring - which waters the broad grassy area besides it all year round.

Even the entrance to the park has something of interest, with Byzantine and Crusader ruins, as well as the remains of a Roman house with a mosaic floor.the area is popular with Israeli picnickers, who could benefit from a few more rubbish bins - or learn to take their trash home with them.

You reach Park Canada by driving on the Tel Aviv - Jerusalem Highway, Route 1, turning north at mechlaf Latrun ( Latrun Interchange) onto Route 3.  The entrance to the park is less than 1 km from the interchange.