The ancient route from Egypt to Mesopotamia was fraught with dangers. One route, The Way of The Sea, took travellers and merchants along the coast, then followed the 'fertile crescent ' to the Lands between the Two Rivers. The journey north was complicated by the need to cross the River Yarkon, which made the journey hazardous. To avoid this, the route headed inland to the first safe crossing point of 'the mighty waterway' and, inevitably, a fortress was built there to protect - and regulate, no doubt - the route. We know how important it was as the name appears in a 4000 year old Egyptian 'cursing text' and was listed in the conquest of Pharaoh Thutmose III.

Of course, given half a chance, King Herod built a town here, calling it Antipatros, in honour of his father. Philistines, Romans, Byzantines, Crusaders, Mamelukes, Turks, British: they all had a hand in building and rebuilding on the site, often using building materials from earlier occupiers rather than starting afresh. 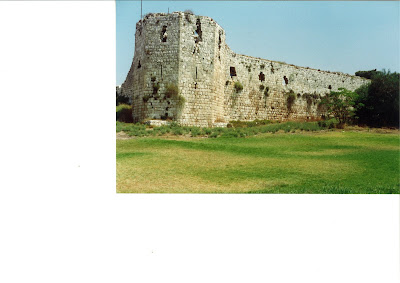 In the 1930's the Mandate government built a water pipeline from here to Jerusalem, 500 mm in diameter and 60 km long, requiring several pumping stations to 'push ' the water uphill. In the War of Independence, Arab forces captured Rosh Ha'Ayin and closed the pumping station, cutting off the water supply to Jerusalem. In the early 1970's serious archaeological digging began, revealing a 3000 year old palace. The ruins are now surrounded by beautiful parkland and can be reached by driving east from Petach Tiqva on Route 483, turning off about 2 km from the town, towards the old railway station. You will not be disappointed. You can see it from Route 6, but there is no direct access.

To view a Google map of this site, please click here