Bar'am ( formerly Bir'im) was once a Maronite border village which was almost entirely destroyed in the War of Independence. What remains today are just the remnants of churches, synagogues… and a strange story. There are several traditions which claim that Queen Esther is buried there. An anonymous student of Nachmanides wrote in the fourteenth century "Near there is Queen Esther. The mouth of the cave is at the top and a large stone covers its mouth." That's it: no more proof, but that seemed enough to those who wanted to believe it.  There is even a painting, dated 1536, which claims to show the gravestone with a tree besides it. Other traditions hold that the site is the burial place of the Prophet Ovadiah. Who knows, perhaps they shared a plot? 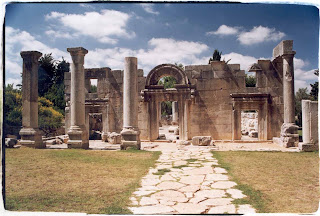 So impressed were explorers to the area in the nineteenth century that they removed the finely carved lintel to 'Ovadiah's Synagogue' and it can now be found in the Louvre, in Paris!

The other synagogue has gained a reputation as one of the finest in Israel, dating from the third century CE. The synagogue faces south, of course, towards Jerusalem and the dedication inscription states, in Aramaic, that its building was sponsored by "the son of Eliezer ben Yodan", clearly a wealthy but perhaps not very modest fellow. You can easily imagine the roof being held up by the rows of columns, although there may have been a second storey - a ladies gallery perhaps! Here you get a real sense of communal worship in Israel eighteen hundred years ago.

You can find Bar'am by taking Route 89 west from Tzefat and turning right onto Route 899 after 15 km at Tzomet Hiram.
To view a Google map of this site, please click here.