Belvoir Castle, or Kochav HaYarden, is one of the most amazing viewpoints in Northern Israel and a monument to the Crusaders who built it some 900 years ago. 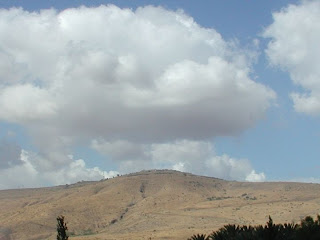 From the car park, close to the entrance, you arrive at the moat, which you now cross via a modern wooden bridge to gain entrance to the main buildings. These include dining rooms, kitchen, water cistern etc, but perhaps one of the most poignant sights is of a stone, decorated with a seven branch menorah, which can be clearly seen embedded in the walls. The builders, the Knights Hospitallers, must have looted it from the ancient synagogue in the village of Kochav, which was situated close by.

Most of the stories connected with Belvoir deal with its stand against Saladin's army, following the defeat of the Crusaders at the Battle of the Horns of Hittin (which I've blogged about before) in 1187, after which almost the entire country fell into the hands of the Arab conquerors. They beseiged the fortress for eighteen months, fighting off the Crusaders who kept counterattacking. Finally surrendering, the defenders were allowed to be evacuated to the city of tyre, now in Lebanon.

In the War of Independence the Iraqi militia crossed the River Jordan to attack kibbutz Gesher (which I've also blogged about) and some of them sought to take up a commanding position there. Fortunately the Israeli troops anticipated this and greeted them with a barrage from two "Napoleonchik" 65 mm cannon they had dragged up there. You can see one similar in the Tiberias town square. You can easily reach Belvoir, Kochav HaYarden , on the Route 717, just 5 km from its junction with Route 90, 12 km north of Bet Shean.

For a Google map of this site, please click here.
Posted by RCEU at 07:49