It is difficult to imagine now, but the walk from Tel Aviv (or Jaffa then) to Jerusalem was a two day trek, not a one hour drive. As the easy going of the coastal plain changed to the rugged Judean hills, we can only speculate what those ancient travellers felt. A quotation from a newspaper of 1873 sums it up: “The place called Bab-el-Wad at the heart of the road between Jerusalem and Jaffa, for many years has been known for its dangers to passers-by, being desolated and ideal for robbers’ hideouts. Even after the road from Jaffa to Jerusalem was paved and a wooden hut was erected to serve as a coffee house – there was no place for the weary traveller to rest and refresh himself. Now it has occurred to the Central Government to build a large, spacious court. Under the court stables are planned for horses, and above the court – pleasant houses, furnished with beds, tables, lanterns, couches, dining tables with a well for freshwater. Wooden huts were erected opposite for the Arabs and Peasants so that they would not mix with the Europeans.” Bab-el-Wad or 'Gates of the Valley' translates to Shar haGai in Hebrew and it is by that name that we know it today.

With so many other concerns, the Israeli authorities left this area undeveloped and it is only during the last few years that restoration began, making the area suitable for visitors. The whole area is being developed by JNF as part of Rabin Park, in memory of the late Prime Minister Yitzchak Rabin. It was early in his military career that Rabin commanded the Harel Brigade that played such a crucial role in gaining access to Jerusalem during the War of Independence and he must have known this area all too well. 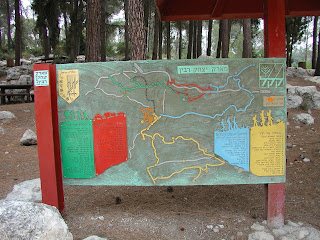 Clearly marked signs, although currently only in Hebrew , allow visitors to take several walking routes, of varying levels of difficulty, to some of the critical sites in the 1948 battles for the roads to Jerusalem. Even without the historical background, the Park, with its children's playground area and magnificent views, is well worth you detour off the main road, as the drive on the road which runs parallel with Route1 is delightful in itself.

You can reach Rabin Park off Route 395, about 5km (3 miles) east of its junction with Route 38, and nearly opposite Ramat Raziel.

To view a Google map of this site, please click here.
Posted by RCEU at 07:13