For over thirty years, from the early 1950's to 1986 the Ministry of Agriculture housed its Forest Research Department at Ilanot. A varied arboretum occupied part of the site and included over 750 species of shrubs and trees, local and exotic, for forestry research, among them 170 different eucalyptus species (the largest concentration in Israel) to determine which would be best suited to Israel’s climate. You cannot help but smell the delightful fragrance. The information was later applied in afforestation projects all over Israel. In 1986 the Forest Research Department was closed and the arboretum fell into disuse, becoming overgrown with weeds and some of the trees died from lack of care. By 1993, the site was rehabilitated and reopened as the National Arboretum. Trees have been planted, including some of the original species that died and explanatory signs prepared. 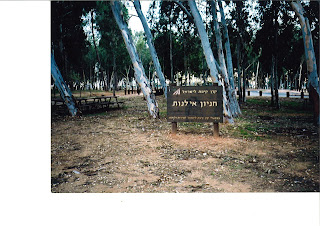 Now you can again visit the site as the arboretum is not only a KKL-JNF scientific forestry centre but also a pleasant walking and picnicking area. The plan is to integrate a learning and fun experience in one visit. Eventually Ilanot will combine sensory and interactive experiences, both indoors and outdoors, but not quite yet.

Ilanot is divided by Route 4 into two sections: Ilanot West and Ilanot East (cross the road VERY carefully). The arboretum is in the eastern section and has been planned as an ecology/forestry complex, with a visitor centre focusing on trees and afforestation. The western section will eventually be developed as an active recreation area, but even now it is worth a trip. Ilanot is on Route 4 some 4 miles (6 km) south of Netanya and just north of Hadassim Junction.