As you race along the Ayalon Highway, Route 1, between Ganot and Kibbutz Galuyot interchanges, try to cast your eyes (safely, of course) south towards Holon. Here you will find one of Israel's hidden gems, now the Mikveh Yisrael - Vinik College of Agricultural Technology, but originally just Mikveh Yisrael. This was the very first modern Jewish agricultural settlement in the country, set up in 1870 by Karl Netter, an Alsatian Jew, on behalf of the Alliance Israelite Universelle, broadly the French equivalent of the Board of Deputies.

Not surprisingly there was early friction between Netter and the Zionist leadership as the school insisted on French as the language of instruction, but these little local difficulties were overcome in time and it is sobering to think that on this spot in 1898, Theodore Herzl met Kaiser Wilhelm II of Germany.  What they talked about, we can only guess!

Much later on, during the War of Independence, the 'Davidka' mortar was manufactured here in great secrecy. In reality it was just a large pipe and made more noise than the size of shell it fired deserved, but it seemed to have the required effect nonetheless. Some of the specimen trees are as old as the settlement itself, especially the Bengali Sycamore, with its hanging roots and multiple trunks, all actually one single tree. 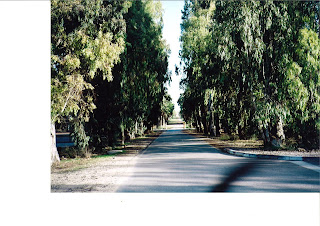 The highlight of any visit will be the botanical garden to the east of the site, originally planted in 1930. Now, with nearly fifteen hundred species and genera of foliage, medicinal, climbing and hedging trees and plants, this backwater in the heart of bustling Holon is just amazing. You reach Mikveh Yisrael by turning south at Tzomet Holon on Route 44, onto Levi Eshkol Avenue. Turn left at Kikar HaLochamim and follow Qugel Avenue to the traffic lights at the southern entrance to the site.It's a bit of a trek and the security guards are sometimes less than helpful, but it really is worth the effort.