Standing proudly back from the rush of today's traffic, just a few metres form the Yeshurun Synagogue in Jerusalem, the Jerusalem Artists' House is one of Jerusalem's most picturesque buildings. It is an elegant stone structure built during the Ottoman period in the 19th century. In 1906, the building was purchased by a visionary of the early pioneers to Palestine, Prof. Boris Schatz who established there the "Bezalel" National Museum and Art Academy. When the Israel Museum opened, the collection transferred to it, where it formed the core of the new collection.

In 1965, the building was renovated preserving still its original aspect and facade. 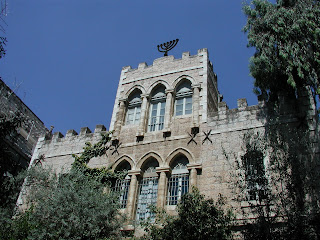 Now managed by the Jerusalem Artists' Association, the Artists' House has become established as a contemporary art centre. Diffused natural light house illuminates its spacious galleries with many exhibitions both by local artists those from other cities in Israel and around the world.

Another important activity of the Artists' House is the "Amutat Hanagid" Art Gallery which holds in stock a rich selection of works by Israeli artists from all over the country, which is especially useful to students and scholars.

For a very special look at art in Israel today, in a gallery with a proud history, celebrating the foresight of one man, The Jerusalem Artists' House is a real treat.

You can find it on Shmuel Hanagid Street, running parallel with King George Street.

To view a Google map of this location, please click here.