As you drive the few hundred metres north from bustling Hertzliyah Pituach beach that, in 1191, a decisive battle was won by the Crusaders at this very spot, which was to established their reign in the Holy Land for another 100 years. Today the place is known as, Apollonia, or Tel Arsuf. But its history can be traced for thousands of years beforethe Crusaders got there.
Archaeologists tell us that the Phoenicians established the first settlement in the sixth century BCE although people had settled in this area 2,500 years earlier. During their heyday they were regarded as the most knowledgeable in seafaring and astronomy, which enabled them to trade various commodities to, it is alleged, as far away as Cornwall. It was the tin that they were after, not clotted cream teas, although that may have been a bonus!
The Phoenicians named the settlement along the coastal plain Arshof, in honour of Reshef, their god of War and Thunder. In the Hellenistic period the city was re-named Apollonia, as the Greeks identified Reshef with Apollo.
It was the Romans who developed the settlement into a real city and it reached its greatest importance during the Byzantine era, when it was re –named, yet again, Sozousa and served as the Episcopal See of Palaestina Prima. At that time it also served as the most important port of the Southern Sharon area and, it appears, was an unfortified city, clearly showing that the land had some sort of peace. The residents built and utilised underground rain water reservoirs and there is evidence of an elaborate glass making industry, as well as wine and olive presses. 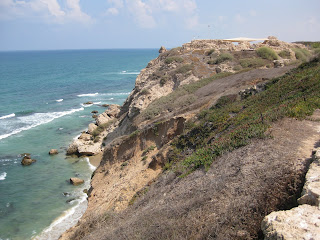 We know that in 640 CE the Muslims gained control of the city and erected an outer wall around just a portion of the city. King Baldwin I succeeded in conquering the city, in the spring of 1101, with the help of the Genoese fleet. Once again the city's name was changed, this time to Arsour and a large castle was built in the northern section of the city. In 1265 the Mamluk sultan Baybars, finally conquered the city and made the Crusaders raze the city and the fortress, which lay in ruins until the excavations began in the mid 1990’s.
Apollonia, with its rebuilt walls and buildings and its delightful walks along the cliff top, is a fascinating step back through layers of complex Holy Land history and is certainly worth a visit. The most exciting view is when turning to look south, when two and a half millennia of occupation lays at your feet with the skyscraper skyline of Tel Aviv in the distance.
Directions: From Tel Aviv take Route 2 north for about 10 minutes, until the Kfar Shmaryahu exit. At the off ramp, stay to your left and follow the brown signs Tel Arsuf. From Hertzliyah Pituach, drive north as if towards the Kfar Shemarhayu junction, but keep driving north and follow the signs.