When you read Pirkei Avot - the Ethics of the fathers - the history of those early leaders of rabbinic Judaism might confuse you. But at Arbel, close to Tiberias, things begin to fall into place.

In the difficult years after the Maccabean Revolt, Nittai was one of the 'zugot' or twins who ruled as joint religious leaders. It appears that his home base was Arbel, where a large synagogue was constructed.  this was well known over the following centuries and the mediaeval Jewish traveller and author, Shmuel ben Shimshon, wrote in 1210, "And we went up to Arbel and there is a big synagogue built by Nittai the Arbelite". He also noted that this famous site had aslo become associated with the supposed graves of Jacob's children, Levi, Shimon and Dinah and, some believed, Adam's son Seth! 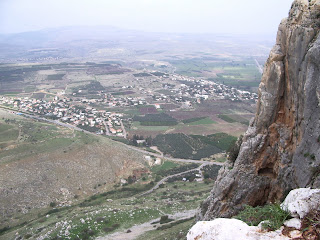 When you walk around the remains of the synagogue today, you can come across pillars that reveal its layout in some some detail,  You will find a recess in the southern wall of the building. Strangely, the explorers from the British Palestine Exploration Fund, in the nineteeth century, thought that this was part of a mosque which was built over the original synagogue.  We, of course, know that this would have  been exactly where the Aron HaKodesh would have been located, facing Jerusalem.

You can easily find this delightful spot by driving west from Tiberias on Route77 and turning north from the dual carriageway nto Route 7717, following the signs to Moshav Arbel. the road will take you through the moshav to the synagogue site and then the observation point.