What's black and white and wet all over? The Sa'ar Waterfall

One of the many streams which flow from Mount Hermon is called Nahal Sa'ar. By our definitions , it hardly qualifies as a mighty waterway, as it is only about seven kilometres (less than five miles) long, before it joins Nahal Hermon at Banyas, but by Israeli standards, it is worthy of note. The Golan region is made up of basalt, black volcanic rock which was laid down at least five thousand years ago. Mount Hermon, however, is composed of limestone, evidence of ancient seabeds which disappeared long ago. Water always tries to find the easiest route and, as you can imagine, the junction between these two rock types gives it just the chance it needs. As the stream falls some 500 metres (over 1600 feet) in its short journey, the sight and sound of the waterfall in full spate is really quite impressive, in a modest sort of way. The local inhabitants made full use of the falls and the others in the area, as is clear from the remains of flour mills which can still be seen nearby. 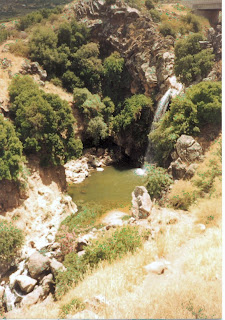 As usual in this area, there is evidence of Crusader fortifications, which used the natural boundary of the stream and its 'mini gorge' to full advantage. The best time to see the falls is during the winter, late Spring and early Summer. It is a popular stopping point for groups and individuals and the twenty minute circular walk from the viewing platform is well worth the effort. The car park is located across the road from the falls and care should be taken in crossing, as drivers, Israelis and tourists alike, may be more interested in the view than in you! The waterfall is located on Route 99 east of Qiryat Shemona, very close to its junction with Route 999 at Si'on junction.

To view a Google map of this site, click here.
Posted by RCEU at 14:26