Perhaps some of the best examples of making the best of the limited rainfall can be found
when visiting Avdat, an ancient settlement built by the Nabataeans, a people with a mysterious origin, who lived in the area in the Mishnaic and Byzantine periods and Ein Avdat. Probably the most impressive period of Negev history was during the time of Nabataean rule. This ingenious people controlled the caravan routes stretching from the Persian Gulf to the Mediterranean. They exported spices, the most desired commodity in the Roman world. By establishing caravan "way stations" spaced at exactly one days camel travel apart where water, food and other supplies were available, the Nabataeans established a network of bases that eventually developed into the very special "cities of the desert." In addition, utilising their intimate knowledge of the desert, the Nabataeans were able to harness winter floods and to harvest crops in a significant portion of the Negev.. The Nabataeans built dams in their fields to halt the treacherous 'flash floods', allowing the retained moisture to seep slowly through the heavy loess soil. They were expert farmers, whose meticulous stone clearing of their fields encouraged more efficient moisture penetration. We can still see the heaps of stones which they created. Some scholars believe that these heaps also served to support vines whilst the dew, which would form overnight in the cold air, would trickle through the heap and water the vines without rapid evaporation. 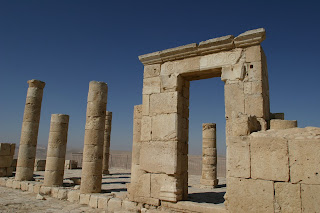 One of the best preserved examples of a Nabataean city is Avdat, named after a Nabataean king who ruled in the second half of the first century BCE (King Herod's time). The city dominates the plateau of the Negev Highlands (over 600 metres above sea level) and became a centre of commerce, culture and worship up until the Muslims conquered the Negev 700 years later. Avdat is well worth a visit and can be found on Route 40, just south of Sde Boker. Look out for the signposts near a petrol station.

For a Google map of this site, click here
Posted by RCEU at 06:48