……when it’s ajar. The remarkable history of Dor

Just 20 miles (30km) south of Haifa, sits one of the most remarkable ports in ancient Israel - and one of its best beaches. Dor was written about by the ancient Egyptians and features in the Tanach, where it appears as one of the five cities of the North which joined Jabin , King of Hazor to oppose Joshua.  But far more than this, archeaologists from many world class universities have been digging for many years and have found evidence of settlement by Canaanites, Sea People, Israelites, Phoenicians, Assyrians, Persians, Greeks and Romans, all of whom appreciated its unique harbour location.  They have even discovered Iron Age slipways and a dry dock!  Even more staggering is the finding of the oldest glassware in the world, a small jar which has been dated to over 1000BCE.

David and Solomon included Dor in the province of Sharon and it seemed to have been an important part of the Northern Kingdom.

Josephus called Dor “a fortress difficult to take” but when Herod built Caesarea just down the road, its importance shrank. Napoleon used it to evacuate wounded soldiers from his siege of Akko, but it came back to prominence in 1891, when Rothschild decided that it would be a good place to start a glass factory, as his wines from the local vineyards needed to be put into something.  The factory failed after four years, as the sand from the beach which he wanted to use was the wrong type, but his factory manager decided to stay in the country and moved down the coast to start a new life – and perhaps even a new town.  His name? Meir Dizengoff. The new town he started? Tel Aviv. 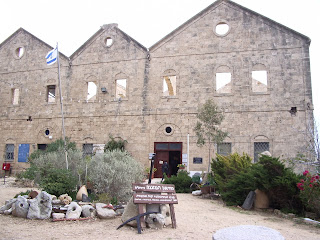 The factory building now houses a fascinating museum of some of the finds from this remarkable site.

Dor is part of Nachsholim, a delightful settlement with a magnificent beach, well worth a visit on its own.  You can find Dor/Nachsholim at the end of Route 7011, which is reached off Route 4, just north of Fureidis Junction.  You cannot get to it from Route 2 directly.
To see a Google map of this site, click here.